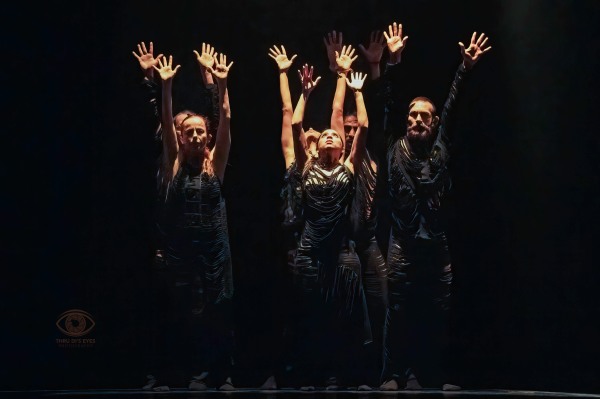 Unbelievably, the Angela Peralta theater was nowhere near COVID-capacity Friday night for Delfos Contemporary Dance’s Vientos de Cambio (Winds of Change), which kicked off the 2022 Spring Season for Cultura Mazatlán. If you weren’t there, you lost out on an incredible performance! Each of the four pieces presented from the Delfos repertoire were stellar, sharing with us the emotionality, power, and drama we are privileged to expect from them.

The third dance, with only the women on stage, was what stuck with me. It hit my heart and soul hard. Each woman’s mouth was taped shut with what looked like electrical tape. They all wore ponytails and hauled and pulled one another around by the hair in disgustingly realistic ways. The performance was way too close to home. Any woman of my age has lived through the experiences portrayed in the dance. The piece culminated with the women removing their tops; their body movements and lighting were reminiscent of the best fine art nudes. At its conclusion, the audience was heard to openly gasp for air; it obviously moved most everyone the way it did me. To me the piece illustrated the pull of our patriarchal systems: how we are all victims when power is not shared; how cruel women can be to each other—something we’ve sadly absorbed from an inequitable, unjust system; and the crucial importance of sorority, equity and social justice. Click on any photo to enlarge it or view a slideshow.

I also loved the piece with the origami boats. The light on the white paper made them absolutely glow on the stage; I’m not sure if my photography was able to capture the wonder of the moment that the audience experienced, with dozens of origami pieces lining the stage.

When I think of Delfos I think emotionality, power, and darkness; their lighting has a theme that, while dramatic, is very challenging to photographers. Friday night’s scenography was an event in itself, as usual; the graphic and powerful lighting, minimalist set and creative costuming were contributing stars of the show.

During the performance and as I write this article, I want to shout out how much I MISS THE PROGRAMS that for years were handed out at every performance in our theaters!!! I know they ostensibly were stopped because of COVID, but then couldn’t we perhaps be told the content by the announcer pre-performance, or read it online? I for one was eager to understand the title of and intention behind each piece, and I love knowing for sure who choreographed and performed what.
EDIT: Having published this, Johnny Millán kindly sent me the program that I had been unable to locate; it had been posted on Facebook. Here it is:

The public here in Mazatlán has a lot to look forward to coming November, when Delfos will celebrate their 30th anniversary with a series of performances including Minimal, which debuted last year. The company will also perform at the Palace of Fine Arts in Mexico City with a new piece.