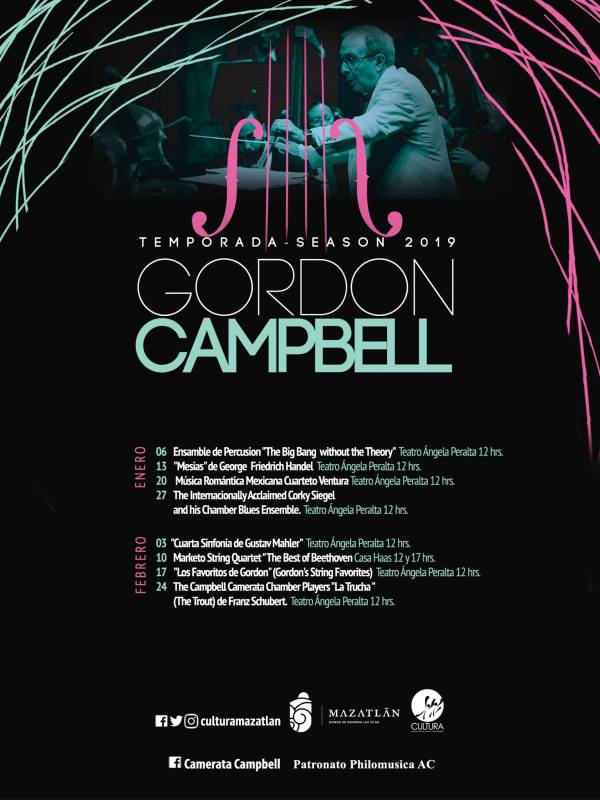 The 2019 Temporada Campbell started off with a bang—a Big Bang. Entitled “The Big Bang Without the Theory,” the outstanding percussion concert did include a bit of theory after all. Click any photo to enlarge it or view a slideshow.

Quick! Do you know how many types of percussive instruments there are? Two main categories: membranophones and idiophones. And what differentiates the two?

The Camerata’s Percussion Ensemble has played for us before, and they always astound—especially because they are so young to be so incredibly talented!

Mazatlán, we are in luck, as this was the first concert of this Sunday at Noon series, which continues through the end of February. Do NOT miss getting your tickets and enjoying a Sunday afternoon of pleasurable music followed by a lunch al fresco in historic downtown. February 27th should be of particular interest to our readers. See you in the theater! 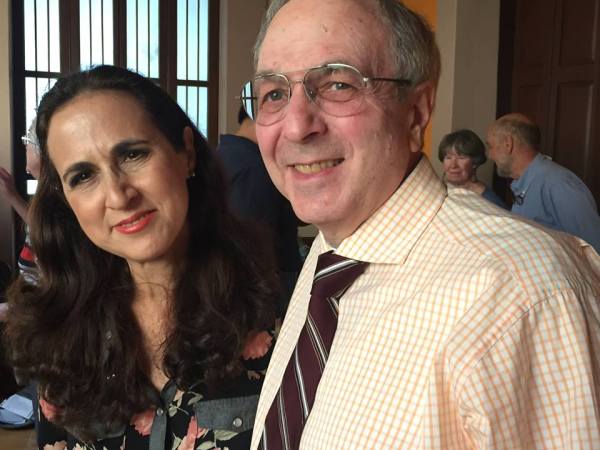 What an honor to go to the Temporada Gordon Campbell concert today with my friend Jessica, who is a total groupie of Maestro Cambell’s. She was beyond thrilled when I introduced them, she couldn’t believe she actually got to have a conversation with him, and then—the cherry on top of everything—she got to get a picture with the Maestro! It is such a complete pleasure when we are able to bring joy to our friends’ lives. Especially, perhaps, when it’s something simple, as we all know that the Maestro is very down-to-earth, approachable, and so very passionate and committed to his audience.

Last season we published a series called “Behind the Chamber,” in which we conducted interviews with the Maestro and his wife, Guianeya Román. I was so very happy to have Gordon tell me that Daniela Liebman, the then-12-year old piano sensation, had been able to obtain first-class representation in part due to the article we wrote about her. Love it when good things go around and come around!

This season’s line up is also magnificent. I don’t know where Gordon gets his incredible creativity from, but the ideas just seem to flow from him. The season is already half over, so be sure to get your tickets now for the remainder of the schedule. The season resumes after Carnavál, on Valentine’s Day, February 14th.

The “Gordon Campbell Season” is a series of six concerts on Sundays at noon. As the program always takes place during Carnavál, there is one concert that is held in Casa Haas instead of in the Angela Peralta theater. Due to the smaller size of the venue, two showings are scheduled that week, at noon and again at five.

Today was that concert, and it was completely sold out, standing room only. And my oh my was the music good! Performers were Cuarteto Ventura from Culiacán, and to say they played Mexican boleros is a huge understatement. Their classical guitars (including a small one called requinto), congas and incredible harmonies resurrected the original arrangements of music from the Golden Age of Mexican cinema—that era of bad movies and wonderful songs. During the set they also played one Cuban son, and, after the standing ovation, they played a ranchero as an encore. Other than that, the event dripped romanticism as you’ve rarely heard it. We so very much enjoyed ourselves! I kept both the official program list of the songs they intended to play, and the list of the songs they actually played, and I’m planning to put together an online playlist of this gems of Mexican romantic music.

Click on any photo below to view it larger or see a slideshow. My apologies, but I only took my cell phone this time. People recently get very cranky when I take a camera to an event; a bit of NOB mentality impinging itself in our paradise… 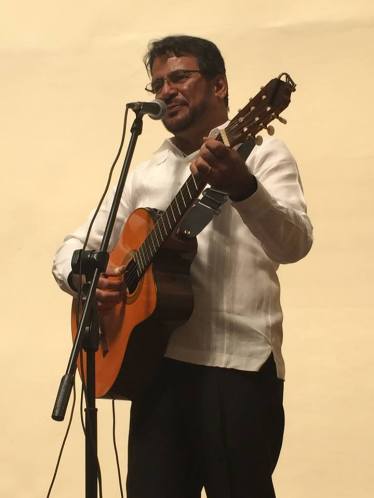 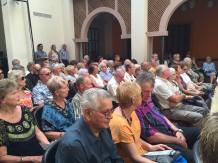 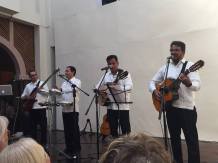 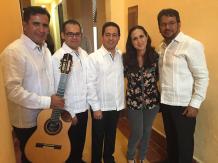 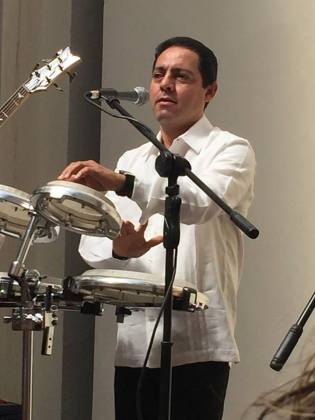 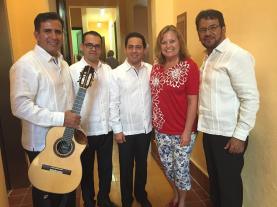 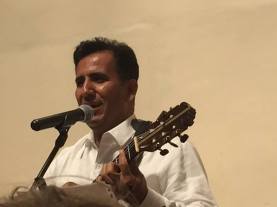 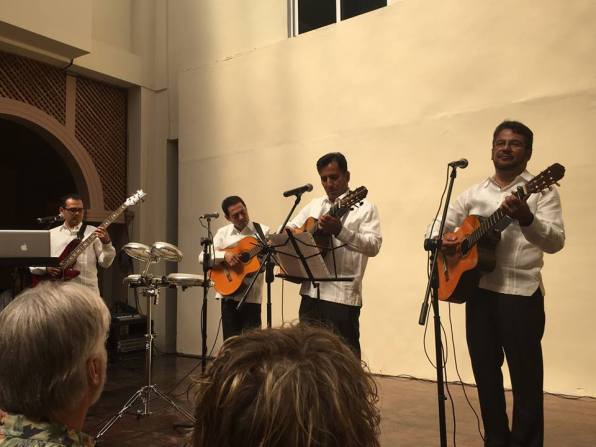 Last week’s concert was also incredibly cool. Tiempos Pasados, an antique music ensemble from Guanajuato, performed using instruments that were breathtakingly gorgeous works of art mostly handmade by the group’s Artistic Director, Armando Ávila, who played a different instrument for nearly every song the group played. He is an incredibly talented gentleman—a physicist, instrument maker and musician! Lord knows what else he does in his spare time. 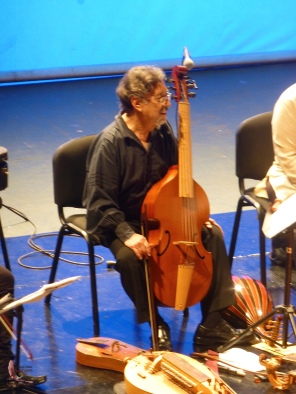 He played a different instrument every song 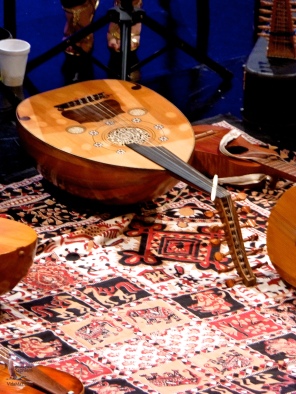 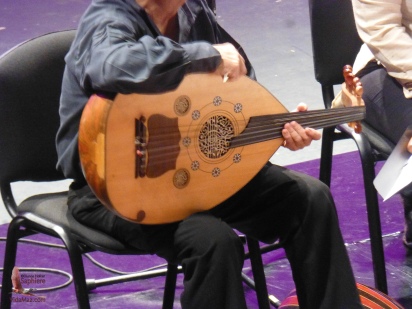 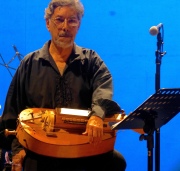 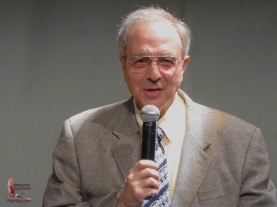 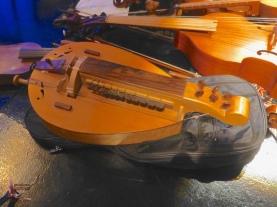 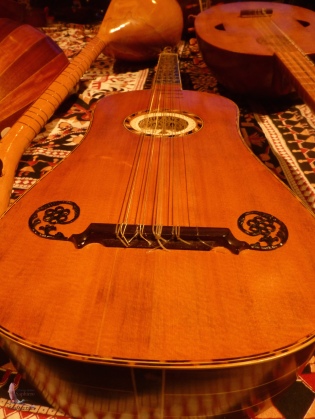 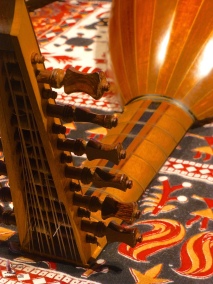 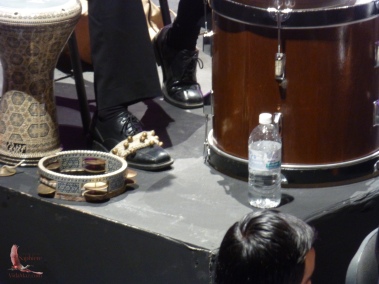 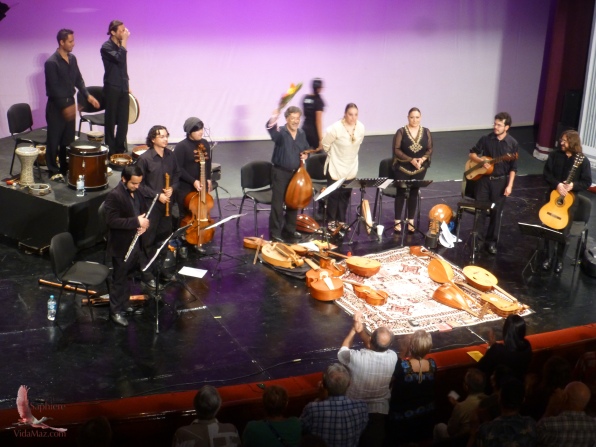 The last three events of this season look to be outstanding as usual. I love how Gordon speaks in both Spanish and English, educating us to the things we might miss without his narration. His rapport with the musicians, and the ear he has for bringing to Mazatlán unique events, are a true gift to our city. Be sure to get tickets (at any Angela Peralta outlet—theater or Rico’s Café) and take advantage! 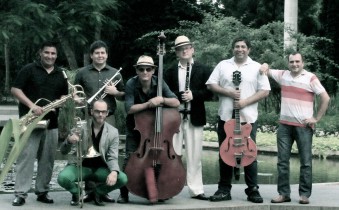 Member of the group, “Hot Jazz”

Hey baby! Is jazz your bag? Ready to get down to some 18 karat grooves? Then jitterbug your way over to the Angela Peralta barrelhouse this Sunday March 1st at noon, where you’ll be able to groove to the sounds of ragtime, Dixieland, New Orleans, swing, and blues.

Closing out this year’s Camerata Gordon Campbell series will be the group “Hot Jazz,” which includes seven very talented musicians from Mexico, the USA, Poland and Spain:

Below is the Maestro and his wife’s Behind-the-Chamber preview of the upcoming concert:

Tickets are 200 pesos for this concert and can be purchased at the TAP box office or online.

You may be wondering where this Boogie Woman’s sudden turn of jazz phrasing comes from? I’d like to credit All About Jazz’s “Jazz Slang.“

“Anyone who doesn’t like music shouldn’t be trusted.”
—paraphrase of Shakespeare’s sonata

Do you love the poetry of William Shakespeare and Robert Frost? And what about choral music? There are few feelings that parallel the sound of a hundred voices lifted in song… The seventh event in this year’s Camerata Gordon Campbell series will showcase Maestro’s Campbell’s two favorite choral pieces.

Shakespeare actually has a poem called “Serenade to Music,” (from The Merchant of Venice) which was actually set to music by Ralph Vaughan Williams (1872-1958), perhaps England’s greatest modern composer. He composed nine symphonies and five operas, plus a lot of choral music. Of particular interest to me is that he traveled the English countryside at the turn of the 20th century to collect folk songs and carols, thus saving them for future generations. He also wrote hymns. His ashes are interred in Westminster Abbey near Purcell’s.

Randall Thompson, composer (1899-1994) of three symphonies and two string quartets, also wrote choral music his entire life—including the famous Allelujia, which premiered at Tanglewood (the Boston Symphony’s summer home) in 1940, and has opened each Tanglewood season ever since. Interesting trivia: Thompson was turned down when auditioning for the Harvard Glee Club as an undergrad.

Bringing to life the poetry of Frost and Shakespeare, and the musical compositions of Williams and Thompson, will be the Community Chorus of Culiacán, this Sunday, February 22nd, at noon in the Angela Peralta Theater. This is the second to the last performance in this year’s .

In our latest entry in the “Behind the Chamber” series, Maestro Gordon Campbell and his wife, Guianeya Román, share with us how their wedding served as indirect inspiration for this upcoming performance.

Tickets to this event are for sale at the unbelievable price of 200 pesos each at the TAP box office or online. 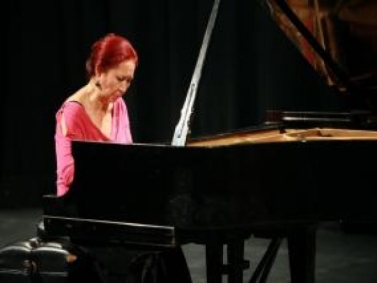 You know we are blessed with cultural events here in Mazatlán, but I especially love it when we are privileged to host a world premiere!

Performance will be at noon was sold out, and CULTURA was opening a second performance at 6:00 pm. Tickets for this event are only 200 pesos, and can be purchased at the TAP box office or online. Come and listen to Maestro Campbell get out from behind his baton and play, for a change!