For many of us, obtaining our first driver’s license was a treasured rite of passage. When it comes to our kids getting their licenses, however, like many parents the thought scares me. And the scariness factor is amplified because our son is learning to drive in what, for us, is a foreign land, and one in which the driving, at times, can seem a bit crazy. Guardian angels please protect him and those near him!

Greg and I obtained our Sinaloa driver’s licenses shortly after we arrived. We took the required class, submitted our documents, drove around the block, had our photos taken, and oilá. Others pay a “fee” and have it all done for them, but we did it above-boards and it was easy-peasy. In fact, the class was downright enjoyable — the teacher is a very good storyteller!

Now Danny’s just gotten his license, so I thought telling you about it might prove helpful for someone.

In his case, he’s a new driver, and we’ve been teaching him whenever we get a chance for about a year and a half. He started out slow, as does everyone, but these days he’s become quite competent.

He wants to work this summer to save money to buy a used car, and he will probably end up buying one with a stick shift. But, our car, the one on which he’s learned, is automatic. So, we enrolled him in a driving school so that he could learn how to use a clutch. The series of classes cost 1450 pesos, and included four rounds of driving of two hours each time, or eight hours total. In addition, there was a three hour classroom session during which they studied rules of the road. He seems to have taken to the standard transmission like a charm.

On Saturday he went to the tránsito, which is located just in front of the Aquarium here in Mazatlán. From the malecón, turn on the street towards the Aquarium. Go past the statue of Don Cruz Lizarraga, and turn right on the street on the far side of the vacant lot. The DMV office (tránsito) is at the end of the street, last building on your left, on the corner. There are two doors. The door on the right is where you file your paperwork.

The door on the left is where you take a class.

First-time drivers under the age of 18 have to take a five-hour class. They tell us the class is offered twice/month on Saturdays from 8:00 to 1:00. The classes seem to be pretty full, and the kids get a certificate upon completion which entitles them to be able to submit paperwork for a license. They do not take a written test.

When we got our Sinaloa licenses we already had U.S. driver’s licenses, so we only had to take a one hour class. At the conclusion of the class, they gave out a written test. There was an English language version of the test that they give out here in town, which seems much much easier than the Spanish language version (it’s multiple choice). 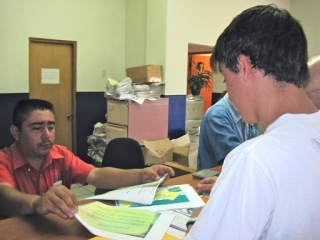 After the class and after you pass the written test, they give you paperwork so that you can go next door and get your license. 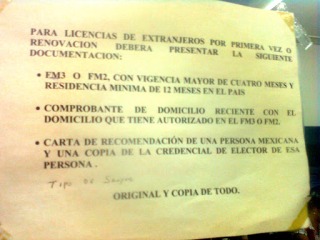 The documents a foreigner will need include (original and one copy of everything): 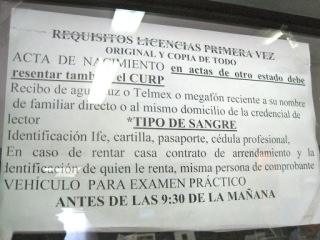 For first-time drivers like our son, you also need to bring:

When you present your paperwork, they will usually ask you to do a driving test. So, you will need a car. They just asked us to drive around the block, nothing too challenging. We’ve been told that they want to be sure you buckle your seat belt and instruct the examiner to buckle his; this didn’t happen for us. Danny was also told that they ask you to pop the hood of your vehicle and show the examiner where you insert water, oil, coolant, etc., though he was not asked to do this.

Be careful as the street beyond the DMV office is one-way to the left; you don’t want to turn the wrong way. Also there are quite a few topes on the road leading up to the DMV office, as well as a stop sign conveniently hidden behind a tree. 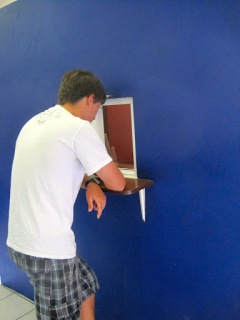 After you drive with the officer, you pay your fee at a booth on the right side. Currently that fee is 344 pesos for a two-year period. 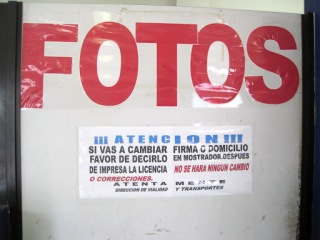 Next they take your photo and produce the license while you wait. 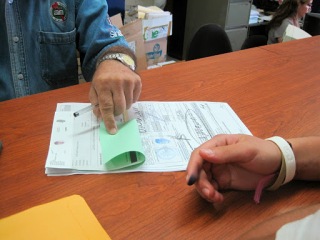 Each license contains a fingerprint of the license holder, so that’ll be the last step in the process. For us we filed the paperwork, did the drive around the block and got our licenses in under 90 minutes.

Licenses are issued Monday through Friday 8 am to 2:30 pm.

Renewals (as well as license plates, titles) can be done at this same office. However, we have had much better luck renewing our licenses at the DMV office in the Gran Plaza — it’s less of a crowd and seems to go quicker.

NOTE: Our son said he learned a lot more in the driving school than he learned in the tránsito class, although he enjoyed both, and that he highly recommends the school for new drivers.

18 thoughts on “Getting a Mexican Driver’s License in Mazatlán”