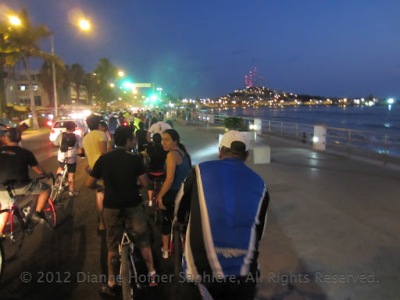 180 bicyclists showed up this evening at 8:00 pm for the very first CicloNoche Mazatlán!

We pedaled only about seven kilometers, but oh was it gorgeous!

The event was organized by SEMARNAT—Secretaria de Medio Ambiente y Recursos Naturales (Brenda Garcia) and CiclosUrbanos, who have been coordinating Cycle Nights in Culiacán since 2009.

Starting at the Aquarium, we pedaled south on Avenida del Mar to Belisario Dominguez, then turned up the road, around the block, and back down to Avenida del Mar. We were escorted by Mazatlán’s finest tránsitos, and we were instructed to stay in the right lane so that traffic could pass us easily. 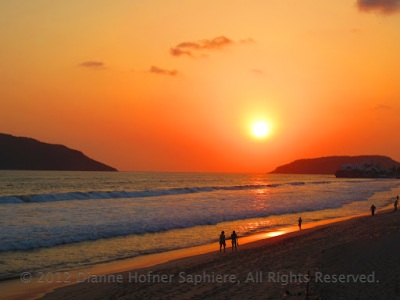 Our route started with the sunset, and ended with the starlight. Along the way we were cheered on and joined by ever-more cyclists. 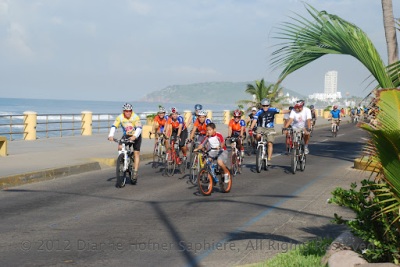 You’ll remember that a couple of years ago a group of active citizens organized a couple of months’ worth of Sunday morning closures of Avenida del Mar for bicycle riding.

The “United for Health” group was led by the very kind and energetic Dr. Angel Eduardo Olivera Sandoval, a local homeopath. Sunday morning street closures to traffic, so that families can walk and ride bikes, are common throughout Mexico and most of Latin America.

Here in Mazatlán we had good crowds turn out, but unfortunately the municipal government didn’t seem to support continuation of the activity. 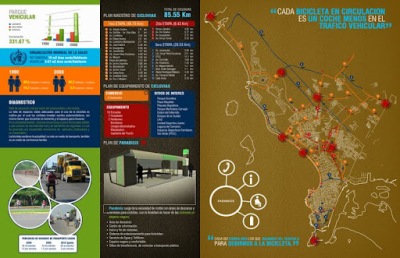 Nor have we thus far seen positive outcomes from citizen-led efforts to build bike lanes here in our port, despite having extensive ciclovías planning for some time now.

The event this evening was held in conjunction with the International and National Congresses of Environmental Science, which has had events at the Mazatlán International Center and the Aquarium.

We were told that the first CicloNoche Culiacán only had 90 bicyclists show up (compared to the 180 who showed up here tonight), so there is obviously a passion for it here in Mazatlán. These days in Culiacán about 1600 people show up for the once-a-month CicloNoches.

It is our sincere hope that this terrific activity can take hold and gain a place in the hearts of Mazatlecos.

Bicycling promotes a cleaner environment, healthier bodies, enjoyment of the outdoors, time together with friends and family. It’s good for locals and out-of-town visitors.

Thank you to CiclosUrbanos, SEMARNAT, and all the organizers of bicycling events and programs in Mazatlán past, present and future! 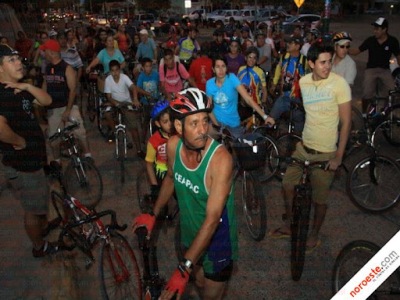 Lets all turn out and show our support for bicycling! For our health and the health of our city!