Sunrise over city park, with the new Avenida de la Bahía in the foreground

For eons Mazatlán has been the land of the estuary—brackish water, half fresh and half salt, that rises and falls with the tides. There used to be estuaries all over Mazatlán, from south to north, brimming with shrimp and mangroves, home to turtles and a myriad species of birds, but sadly not many remain. Most have been filled in completely, like those in the Golden Zone, which leads to the frequent flooding of that area in rainy season. Now we are losing Estero del Camarón, shown on the map below (as Laguna del Cameron), which runs south from Rafael Buelna over Insurgentes to the Aquarium at Av de los Deportes, thanks to the building of Avenida de la Bahía. 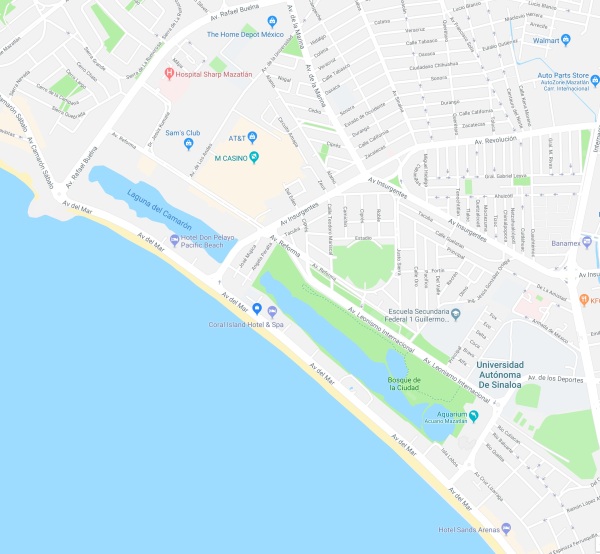 Avenida de la Bahía has been in the city’s plans for over a decade; it’s nothing new. What is new is that most everyone believed the road would be built in the “set aside” behind the existing buildings along Avenida del Mar. There was plenty of room beside the estuary for two lanes of traffic plus parking on both sides. Thus, when it was announced that the long-planned road would be built, there wasn’t too much ruckus.

People who live on Avenida del Mar are grateful to have a second egress, as this major city artery is so frequently closed due to races and other events. We actually, naïvely, were pleased to think that those who had “stolen” land from the estuary—hotels and salones de eventos that had “pushed out” into the estuary—would now have to give up that appropriated land in order for the road to be built.

Alas, no such luck. Despite the fact that city park is supposedly a wild bird sanctuary —”protected land,” we’ve always been told— construction of the new Avenida de la Bahía doesn’t even start till way beyond the land that we were told was set aside for the new road. Contractors have spent six weeks now filling in OVER HALF of the estuary facing the Bosque de la Ciudad/City Park! They have been working 24 hours a day seven days a week, dredging the estuary of plant life, then dumping trucks full of huge boulders into the water, dozens of truckloads per hour. They add dirt over the boulders, and cement on top of that. First they built two lanes, which we thought was bad enough; then four. Now they are adding diagonal parking on the west side and possibly more on the east. It just keeps getting wider and wider! The road is now wider than a freeway. After removing all the parking from Avenida del Mar, of course more parking is needed. But does the estuary have to pay the price? Click on any photo to enlarge it or view a slideshow.

The site we all imagined the road WOULD be…

The site we all imagined the road WOULD be, to the west of where it is.

View of how the road takes over the estuary

View of how close the road gets to City Park

View of how the road takes over the estuary

View from on high of the new road

View from on high of the new road

Scooping the living into trucks 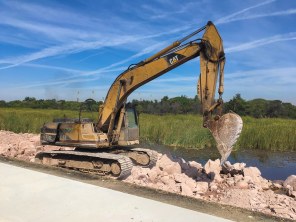 The way they have built the new avenue actually leaves water trapped in between it and the Avenida del Mar—water that will attract mosquitoes and disease. I can only imagine they’ve left that area so that property owners (primarily the Tellería family, I believe) can build locales or storefronts facing the planned Parque Central.

The entire project is the most blatant disregard of our environment that I have witnessed. I was told the project was stopped, put in amparo, and according to the Noroeste, that is when they started working at night instead of during the day. A few days later they extended from night work to 24-7 work, and about ten days ago they put up signs that say they are taking care of the environment. I find the irony heartbreaking.

They are now within a couple hundred yards of Insurgentes. To my knowledge they have yet to buy any of the houses they will have to knock down to connect the new avenue with Insurgentes and continue north to Rafael Buelna. Eminent domain?

That housing area already floods in rainy season, as does the area in front of the Gran Plaza. I imagine now that they’ve reclaimed over half of the estuary, the area around the stadium, city park, Insurgentes and the Gran Plaza will flood much more dangerously; where is the water to go at high tide? They have built the road up high, to keep it from flooding. But we sure haven’t seen them build any exit for flood waters. Hopefully I’m just missing something.

Mazatlán’s allure for tourists and residents is its natural beauty, its marine life and seafood. Destruction of the environment like this is shortsighted. I was excited about Central Park and the new Mazatlán Museum, but if losing our estuary is the price we are paying for them, it is way too high.