This morning the Presidenta del Systema DIF de Mazatlán, Sylvia Treviño de Felton, gave her first annual report to a full house in our gorgeous Angela Peralta Theater. I attended with a group of girlfriends, and walked out of today’s event amazed at the amount of work Ms. Treviño and her team have been able to achieve. Congratulations and thank you to all!

I’ve long been fascinated with the incredible work done by Mexico’s DIF, the national system for the Development of the Family (Desarrollo Integral de la Familia). DIF’s services target children, women, the handicapped, and families in need. Its broad range of services includes, among many more:

DIF’s is a much different system than those I’m familiar with from my previous residences: the USA, where the Department of Health and Human Services seems to me far removed from daily life, and churches, non-profits and other civic organizations play a major role in feeding the homeless or aiding victims of domestic violence; or in Japan, where government-provided social services seem primarily to involve health care and pensions.

When I’ve been disappointed by municipal administrations, somehow our local DIF still shines through. How much better, then, under a first couple who seem to truly and honestly care about the welfare of our people and the city?

The mayor of the “cabildo infantil” or children’s city council

Sylvia and Carlos Felton this morning in the TAP

This morning’s event kicked off with two songs sung by a selection of adorable girls from the local DIF chorus, and a dance performance done in silhouette and demonstrating some of the various services provided by DIF. 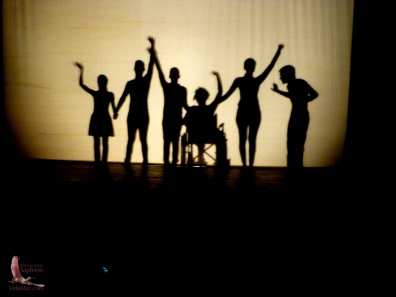 Instead of the usual long and detailed verbal report, Ms. Treviño instead showed us a ten-minute video summarizing DIF Mazatlán’s major activities during the first year of the Felton administration. It was much more impactful to see photos and watch video as the facts and figures were shared.

Sylvia followed the video with a short and heartfelt presentation, and shared copies of the official 2014 printed report with the Mayor and the Director of DIF Mazatlán. 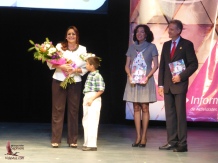 One of the colorful event banners 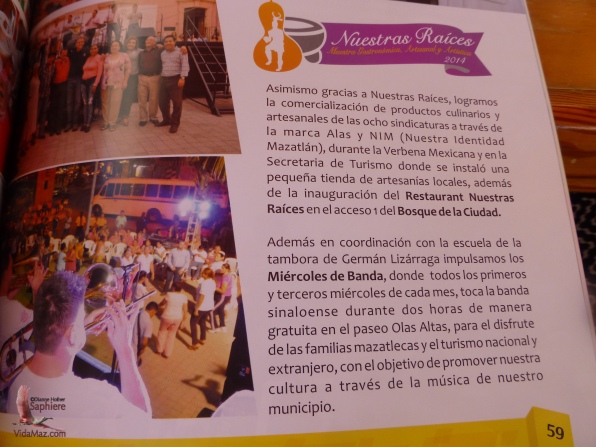 If you regularly read this blog, you know that I am frequently disappointed by government officials who so frequently grab the limelight and the credit away from staff and volunteers who do the day-to-day heavy lifting. Such was not the case today. Ms. Treviño de Felton showed a second video, one she had created especially to thank DIF staff—the team that helps realize all the good work on behalf of children, women, the elderly, the handicapped, and families in need in our municipality. It was a wonderful feeling to be amongst the cheering, hooting and hollering coming from the DIF staff and volunteers present in the theater, as they saw photos of their favorite colleagues appear on screen.

If you are not familiar with the activities in which DIF Mazatlán is engaged, I urge you to watch the video below, subtitled in English. Unfortunately the video that was shown this morning, summarizing the first year, does not yet appear on DIF Mazatlán’s YouTube channel. I’m confident it will in a few days, so if you’re interested, be sure to check the link.