Last Friday night after the opera, my friend and I were walking around the Machado. We meet a 23 year old Aztecan named Manuel, who told us he moved to Mazatlán two years ago from the interior of the country because he wanted to live on the beach. He said he loves it here, but misses home.

His totem or spirit animal is the jaguar, and he was gifted the skull and pelt of a baby jaguar when he was younger. Apparently that little baby killed a few cows, and the farmer then killed him. Manuel wears the taxidermied piece as a headdress, along with extensive feathers and beadwork that he makes, and often sells, to make a living. He and his friend Ignacio perform on the Plazuela Machado most weekend evenings, Manuel told me. Click on any photo to enlarge it or view a slideshow. 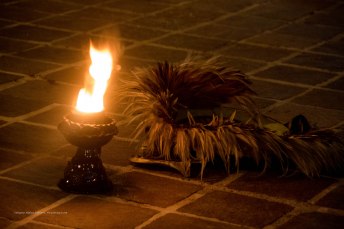 Nacho, Manuel’s friend, is only 19. Manuel dances and Nacho plays the drum. Manuel tells me that his father taught him to dance the traditional way as soon as he learned to walk, and he’s been dancing ever since. He jumps, spins, and uses fire in a pottery incense burner. He tells me there are dances he can perform in public, and those he can not as they are private to the community. He speaks a bit of Nahuatl, but not as much as he’d like.

Welcome to Mazatlán belatedly, Manuel and Ignacio. Obviously I need to get out more often, lol, as it’s the first time I’ve met you. I very much enjoyed meeting you both, and your performance. Thank you for sharing a bit of your culture. I hope to see you both again soon and learn more.

Yesterday morning during a groundbreaking ceremony in the Plazuela Machado, Mayor Carlos Felton spent a significant amount of time thanking YOU, Mazatlán’s foreign resident community, for the investment and contributions you have made and continue to make in the city. He held us up as an example of how to actively engage in civic life, noting how many of us have made efforts that have transformed Mazatlán into a better place for all to live. He spoke about how foreign residents were some of the first, and most vocal, to defend Mazatlán during the years of violence and economic downturn, and how foreign investment has helped to restore many historic homes. He told a story of one expat who, during the city elections, knew all about the issues, and he also spoke at length about our friend Janet Blaser’s most recent editorial in M! Magazine about recent city improvements. Here’s a short video of his speech:

Glen Rogers, local artist and community leader, announced her plans to donate the design for a piece of interactive public art for the Plazuela Machado. Her design is a four-sided bronze chair with a 10-foot-tall back, decorated with cutouts of local flora and fauna. The Mayor said that they will begin looking for sponsors for the art project in the new year. Glen is the woman who started the very successful Art Walk/Camino del Arte ten years ago. In its first decade the Art Walk has grown to not only showcase a broad spectrum of local artistic talent, but also has become a monthly boon to downtown restaurants and cafés. Here’s a short video of Glen talking about her new piece:

Glen Sorrie, owner of Casa de Leyendas B&B, was also on hand and spoke of his and his wife’s experience moving here and opening their business. Mazatlán has a long history of foreign residents and investment; heck, the city was in large part founded by European, North American and Asia-Pacific immigrants during the gold rush days! We are blessed to live in a city in which foreign immigrants have historically been not only welcomed but embraced, and this heritage gratefully continues.

The event this morning was actually a press conference and groundbreaking ceremony (banderazo or flag waving in Spanish) for the rehabilitation of the Plazuela Machado, led by Alfredo Gomez Rubio, owner of Pedro and Lola restaurant and a key leader of the restoration of our Centro Histórico. I believe we all recall that some upgrades to the Plazuela just happened. We all know there are other areas of the city, including the main Pino Suarez Market, that could much use renovation. But, hey, we’ve got palm trees on the malecón, plans for an expanded city park that includes a major art museum (thank you, Neto Coppel), and soon, a new Carpa Olivera outdoor pool in Olas Altas. Refreshing the Plazuela is definitely a good thing for our city’s image.

Click on any image below to view it larger or see it as a slideshow. 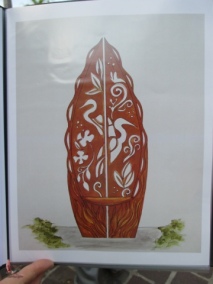 Glen with her drawings

Alfredo with Emery and Greg 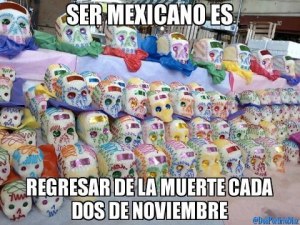 This coming week is a wonderful time in Mazatlán, with altars to departed loved ones set up in homes and businesses, “dead bread” (pan de muerto) for sale in the bakeries, and sugar skulls everywhere. Soon we’ll be reading the calaveritas in the newspaper, in homage to (or roasting of) politicians and celebrities.

The callejoneada (parade with the Catrinas past the altars with the donkey-pulled beer kegs) will be Thursday night starting in the Plazuela Machado at 8 pm. RIGHT NOW the Municipal Center for the Arts, Cecilia Sanchez Duarte, Glen Rogers and others are working on cool steamroll prints of Catrinas and other images to be carried in the callejoneada. If you are on Facebook you can check out photos here.

Please be sure to get out and enjoy all our beautiful port has to offer! Day of the Dead is one of our favorite local festivities!