Some of our gorgeous Mazatleco Japanese kids, including my friend Chika’s children,
wearing hakama and kimono for the occasion.

Well, the 12th National Nikkei/Japanese-Mexican Convention is coming to a close. Events included the election of “Miss Nikkei,” a dozen or so incredible conferences, an early morning dance on the beach combining traditional Japanese buyo and Aztec dancing—to symbolize the Mexican-Japanese mix. We had kimono, happi and hakama, t-shirts with the Mazatlán deer sketched in kanji characters, origami paper folding and shoudo calligraphy, and a terrific, quite large ikebana/flower arranging display. Kudos to the unbelievable Esperanza Kasuga and all the convention organizers, staff, and volunteers!!!! お疲れさまです！！！！Over 400 people registered for the full convention, and thousands of people attended the events this week, commemorating 400 years of Mexico-Japan relations. 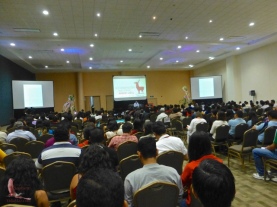 One of the conferences 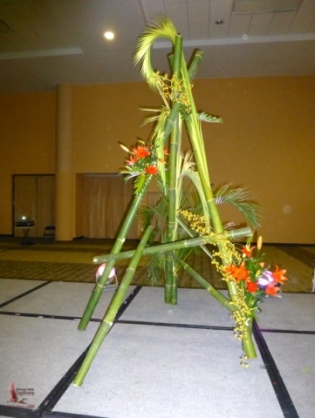 Two huge ikebana arrangements at the front of the main hall 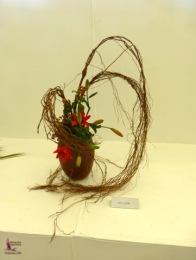 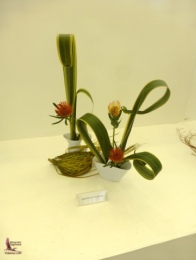 The Hasekura ship from the Carnavál parade, parked in front of the Convention Center 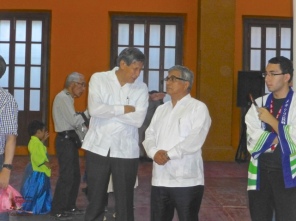 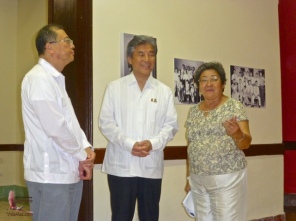 The Ambassador, Senator, and Mrs. Kasuga 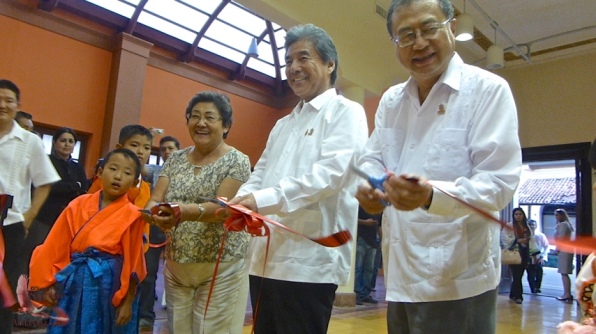 It was wonderful to meet so many people who were so thrilled to meet others with whom they share so much in common, and great to learn more of the history of Japanese people in Sinaloa and in Mexico. I met Mrs. Nakamichi, for example, who was joyfully proud to tell me about her grandfather (speaking in the video below, in front of a photo of her grandfather):

I was especially psyched to learn that kamaboko, traditional Japanese fish cake, is made right here in Mazatlán! How could I have lived here six years and not known that?! I am told I can buy it at Ricamar, which is on the right side as you head to the airport, just past Café Marino. Yippeee!!!

I loved the simple graphic below, outlining the first voyage of Japanese people to Mexico, then to Europe, and back again. Hasekura sure had perseverance and an adventurous spirit, as did Japan’s first immigrants to Mexico. 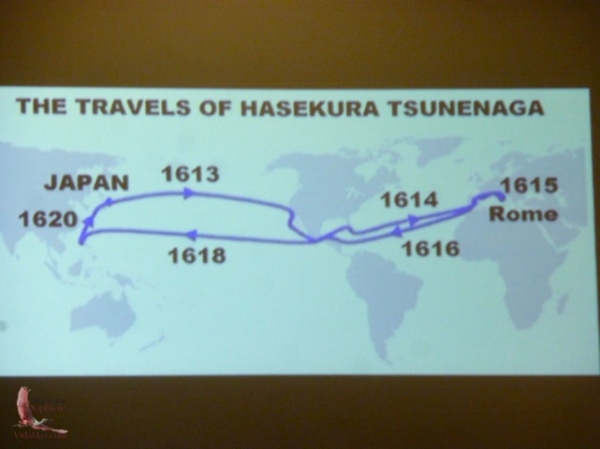 I was privileged to meet Hirofumi Nakasone, the Japanese Senator from Gumma Prefecture and former Minister of Foreign Affairs as well as Minister of Education (I met his father, the Prime Minister, years ago and immediately noted the family resemblance), along with Shuichiro Megata, Japanese Ambassador to Mexico, in Casa Haas at the opening of the historical photo exhibit on Friday. 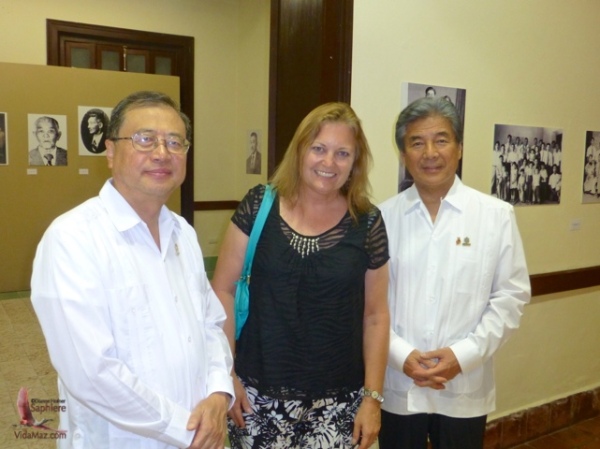 Mr. Megata, myself, and Mr. Nakasone

My friend Joaquin Hernández showed us a few volumes from his astounding book collection, and I absolutely fell in love with this wood block print of Mazatlán. We are blessed with so many incredible intellectuals and all-around terrific people here, I am consistently amazed.

Mazatlán, Ukiyoe style. I need this!!! 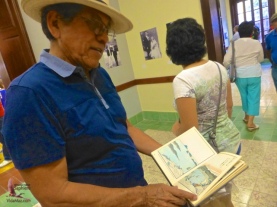 Joaquín Hernández with the book 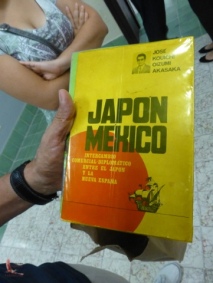 The photo exhibit at Casa Haas will be open for two or three more weeks, I am told, so do not miss it. In the rear room is a film made by a Japanese-Mexican woman from El Rosario, Sachiko Uzeta Amano, entitled, Del Otro Lado del Mar. The film was made in 1997 to commemorate the 100th anniversary of the arrival of Japan’s first immigrants to Mexico, and discusses their descendants cultural integration into Mexico and preservation of their Japanese heritage. I’ll have to go back in order to watch the whole thing. Seeing traditional Japanese festival accoutrements alongside the Virgen de Guadalupe sort of blew my mind!

Kitaoka brother and sister with a photo from their childhood

The ambassador, the senator, and Esperanza with the gorgeous kids 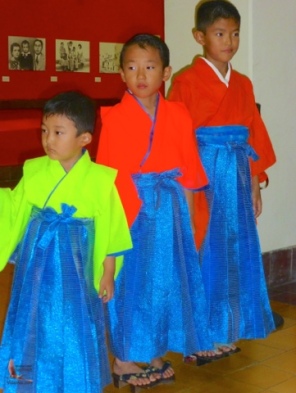 Japanese in Sinaloa celebrate the coronation of the Showa Emperor on 10 Nov. 1928

Japanese Association of Mazatlán celebrates the birthday of the Taisho Emperor in 1926; he died that December. 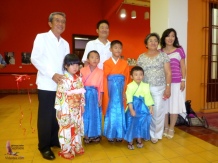 Esperanza with her family members 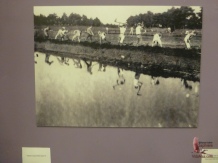 Working the fields in Ahome, Sinaloa

Our dear Mexican virgin being celebrated by the Japanese-Mexican community

Below is a highlight reel of Friday night’s Nikkei Convention concert in the Angela Peralta Theater, with interview from baritone Adán Pérez. 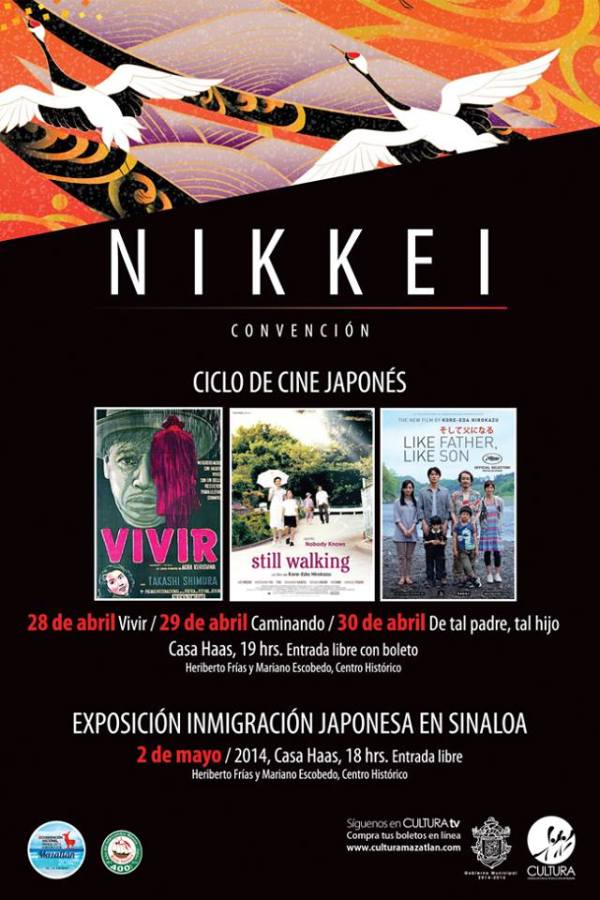 I announced to you back in January that this year we celebrate 400 years of Japanese-Mexico relations. We had the “black ship” float and two Japanese dance troupes in Carnavál, and this weekend the Mexico-Japan Association will hold its Nikkei convention in Mazatlán; I can’t wait for that!

In preparation, CULTURA got in on the action this week with a series of three Japanese movies, subtitled in Spanish. While the free tickets were given out within just an hour or two, and those of us living outside Centro Histórico, as usual, were not privileged to get any, we have been able to get a seat the past two nights. The last movie in the series will show tonight, Wednesday, at 7:00 in Casa Haas. Oh how I have enjoyed them! Greg has generously accompanied me to each of the two so far; hopefully he will again tonight, despite what he’d prefer to be doing.

Then on Friday night, also at Casa Haas but beginning at 6:00 pm, will be an exposition on the history and impact of Japanese immigration in Sinaloa state. Yes, I am so excited!!!! I hope to see you there.

Below is a short recap of the three movies in the series.

I’ve seen “Ikiru” several times. It’s the only Kurosawa movie of that period that does not feature Mifune, and it was required viewing in the 1970s when I first studied Japanese. This was my first time to view it in Mexico, however, and the similarities I noted between my two oh-so-different adopted cultures were really striking. The protagonist, who’s dying of cancer, goes out on the town at one point, and despite the kimono and tatami you’d swear he visited Mazatlán—from La Botana to trumpets in a banda surprising you from behind and poorly sung karaoke, it was puro Mazatleco. The main character (Watanabe-san) is a city official who works in a dysfunctional bureaucracy in which very little gets done and nearly no one thinks about community needs, and at one point he has to navigate the Yakuza (mafia) visiting the vice-Mayor’s office. Sound familiar? I thoroughly enjoyed this re-viewing.

I had not previously seen this movie, nor am I familiar with this director, and I thoroughly enjoyed it. The film so well captured everyday Japanese life—the love of nature, cooking and eating (it sure made me hungry!), respect for elders and ancestors, the pace of conversation, the communalism of family life. The people in this movie were bitterer than most Japanese I know, but it is, after all, a movie, and a movie needs tension.

This is the story of a businessman who learns that his six-year old son is not his biologically, but that two boys were switched in the hospital at birth. Now he must choose between the son he has raised and his blood kin. Sounds pretty interesting but, for me, the real joy is hearing the Japanese language, the sounds of my other adopted home, and feeling as if I’ve visited this other land I am so very fond of. なんて懐かしい！！！ 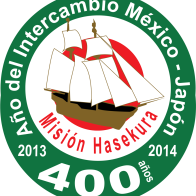