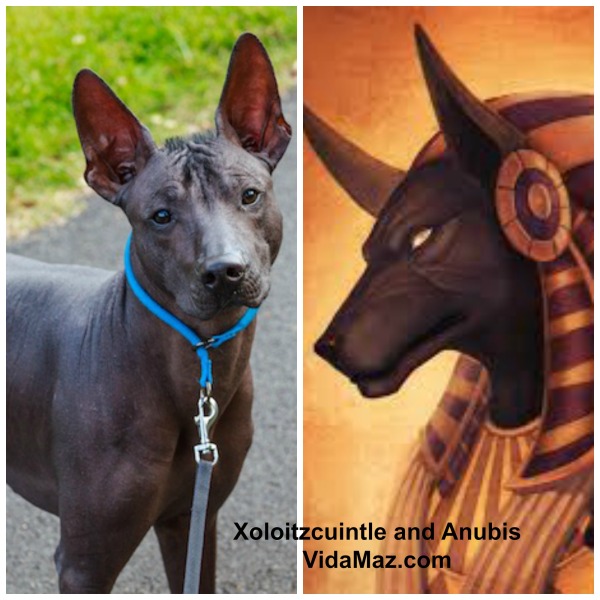 This year’s official theme for Day of the Dead cultural activities in Mazatlán was Mictlán—the world of death in Aztec mythology. Navigating the nine levels of Mictlán towards the evening star in the heavens was said to take nearly four years and was full of challenges. The dead needed help, a guide, and they found it in a dog—Xoloitzcuintle—a carnation of Xolotl, the god of fire, lightning, sickness and deformities, twin brother of Quetzalcoatl. 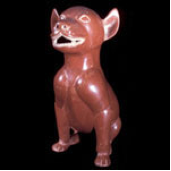 Clay dog statues have been found ritualistically placed in the tombs of Aztecs, Mayans and Colima Indians, as have the skeletons of actual dogs. Sort of reminds you of Anubis, the Egyptian dog-god, lord of the underworld, doesn’t it? They are both black, guide the dead, and have pointy, stand-up ears!

Well, a modern-day incarnation of Xoloitzcuintle apparently lives in El Rosario, and her name is La Tigresa!

For the past year, every time Tigresa hears the funeral bells of Our Lady of Rosario ring, she walks into church and politely sits down to attend the funeral mass. When the mass is finished, she walks in the funerary procession, in front of the casket, all the way to the cemetery. There she stays with the body until the last person has gone home.

La Tigresa distinguishes between the bells of a funeral mass and those of ordinary mass, which she never attends. If there are two simultaneous funerals, Tigresa walks in between the two coffins, treating both equitably. If there’s a funeral in the morning and another in the afternoon, she attends both. If the body is taken back home after mass, that’s where she heads, too. 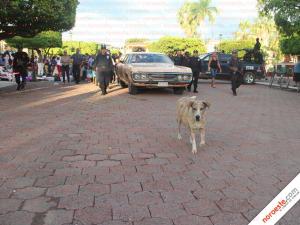 Photo from the Noroeste by Hugo Gómez

I want to thank my good friend Lupita, who shared this story with me from Sunday’s Noroeste. I just love it, and hope you will, too! We’ve got to meet La Tigresa!

Xoloitcuintle is, of course, a breed of dog here in Mexico, often shortened to “Xolo.” These beautiful, often black, hairless (and therefore flea-less) dogs were almost extinct, but concerted efforts to rescue it have been successful. It is believed to be one of the world’s oldest and rarest breeds, dating 3000 to 7000 years. In pre-hispanic times they were considered sacred, with healing properties both for the body and the soul.

The name is a combination of the god’s name, Xolotl, and izcuintli, which means “dog” in Nahuatl, though there are those who say the name means “he who snatches his food with teeth sharp as obsidian.” The breed has three unique features that baffle biologists:

La Tigresa is obviously not a Xoloitcuintle breed, but would, indeed, appear to be an embodiment of this guardian of the underworld!

Mid-week. Wednesday. “Hump day.” We decided we needed to get out, see a bit of the “interior” of our beloved Mazatlán that we hadn’t seen in a while. Not like we don’t often do that, but, hey, it’s Wednesday and we’ve been working hard … 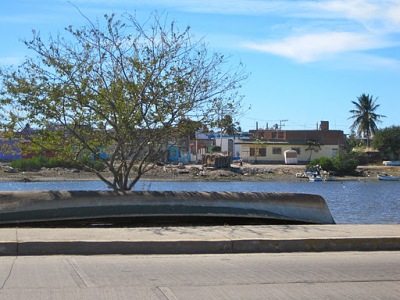 We ended up driving toward Infiernillo. We were so very psyched to spend time noticing just how clean everything looks, we suppose after it was cleaned up from the flooding last year. Danny’s Scout troop has gone out there many times cleaning up. But this was obviously a clean-up of larger, more mechanistic proportions. Well done, city! 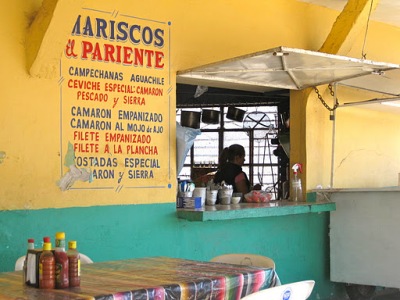 We stopped at a little mariscos and taquería that Greg had noticed yesterday, when he was refilling the gas for the grill. It is called El Pariente, and it did not disappoint. 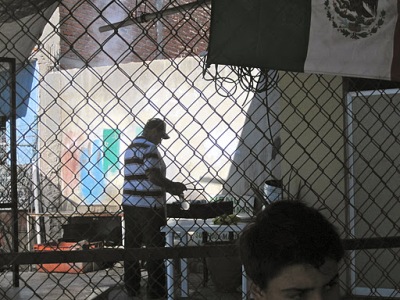 The owner was very gregarious, and worked busily on the outdoor grill. His wife worked the indoor kitchen. 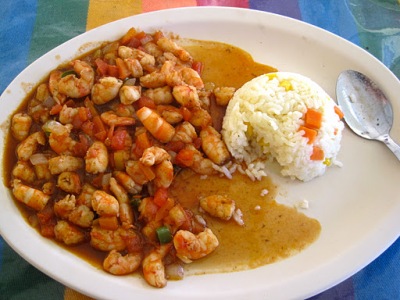 Despite the pull of the ceviche de jaiba and other cold dishes, we all ordered shrimp: camarones rancheros and 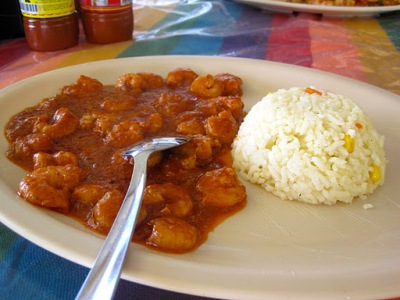 camarones a la diabla. Both were really tasty, portions were huge (we couldn’t finish), and 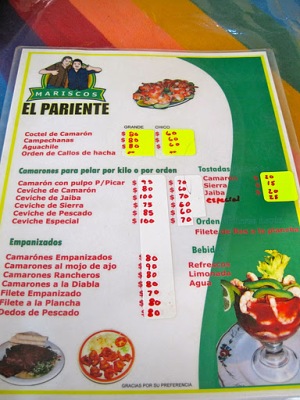 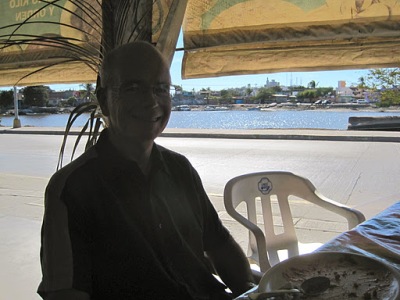 Plus, the view was very pleasant! 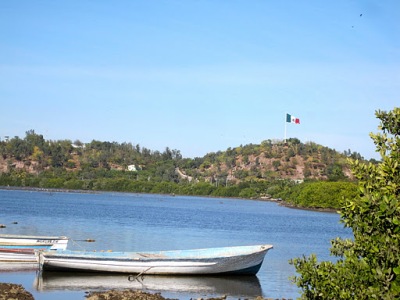 After lunch we drove around the other side of the estero, past the fishing pangas, 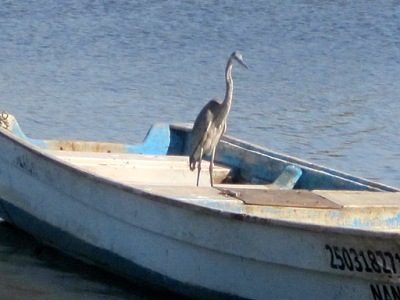 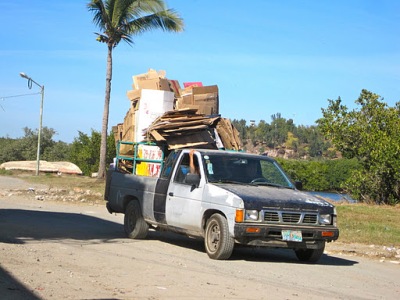 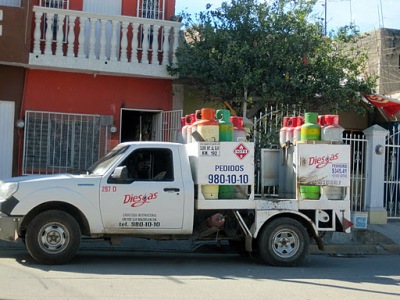 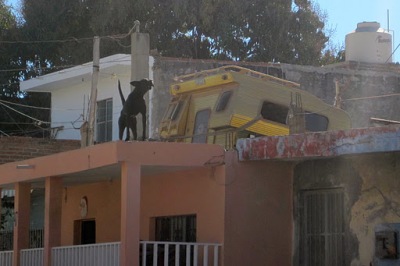 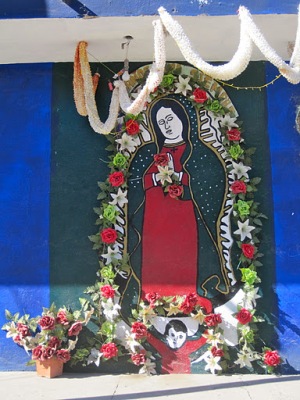 and a hand painted and festively decorated mural of the Virgen.

All in all, a most welcome mid-week respite to recharge our batteries and ground ourselves in the reality and security of our beloved city before we headed back to work.