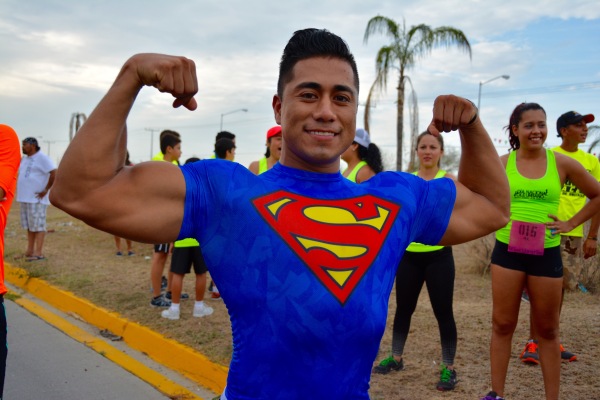 This morning Real del Valle was filled with warriors—of the obstacle course variety. LeTour Fitness held its annual “Warrior Race,” which was a 4k race that included a run up a hill and obstacles such as jumping over rolled bales of hay, scaling walls and fences, doing burpees, running obstacles, and crawling under barbed wire. It was my pleasure to watch Greg and Danny compete in the race. And, honestly, Mom enjoyed the eye candy, too. Click on any photo to enlarge it or view a slideshow.

Greg scaling one of the inflatables

Danny seeming to just walk up the inflatable. Youth! 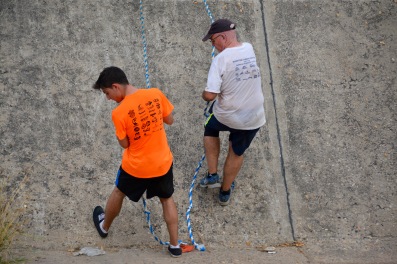 He says he got that 6-pack from yoga…

There were at least three athletic events in Mazatlán this morning, including the CicloRun up the lighthouse/faro. This Warrior Race was fun because people dressed up and everybody had SUCH a good time: families—parents, kids, siblings, uncles and aunts—groups of friends and work colleagues—including a large group from UAS, and there were quite a few senior citizens. Two of my favorites included a pony-tailed woman who came in about 3rd or 4th place among the women, and a 68 year old lady who completed the race, but had a hard time with the final climb. The cool thing was that, in this race, people helped each other out, as you can see in the photos below, where people are actually pulling and pushing each other over an inflatable. Everybody finished the race muddy, wet, sweaty and happy.

The devil ran, too.

Warriors visiting OXXO after the race

Danny sliding on through…

Greg enjoying a bit of a break…

Two of these kids had GoPros. I wanna be them!

This woman rocked it! 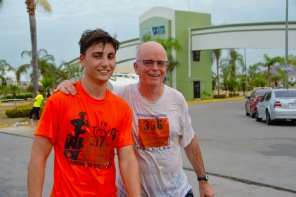 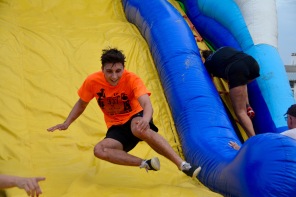 As usual with events like this, there were at least three emergency calls that I witnessed—heat stroke, despite the fortunately overcast morning. Below are photos of who I believe to be the male and female winners; at least they came through in first place by a safe margin at the point in the race I was located.

Way to go, everyone! Thanks for the fun!