You may recall that last month we went to Durango, prior to the road opening. This weekend we had to go again. Thank GOODNESS the road was open! The Baluarte Bridge is incredible, and the entire drive is unbelievably gorgeous and easy (three hours door to door). Greg will write more about that in a separate post.

We were heartbroken to miss the callejoneada for Day of the Dead here in Mazatlán, but we thought we’d share with you a glimpse of what Día de los Muertos looks like elsewhere. In Durango the cemeteries were full of people, of course—flowers, cleaning, bands, praying and partying. The city also hosted a hot air balloon festival. In the main plaza, in front of the cathedral, there was a large “Day of the Dead” display set up. It contained a dozen or more life-sized papier maché katrinas and other scenes, plus a few stages for performances.

Durango was completely different this time, primarily because last time we were there it was the height of their major annual cultural festival. Streets, plazas and restaurants were much less crowded this time around. Below are some photos we took this trip—a favorite new restaurant, some street scenes, and the plaza display. Click any photo to enlarge or view a slide show. 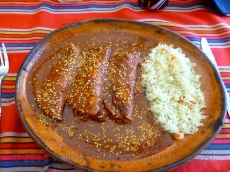 Best enchiladas moles since we were in Oaxaca

This is the hole-in-the-wall restaurant where we ate the enchiladas, out of this world pozole and birria. Around the corner from the Hotel Gobernador. 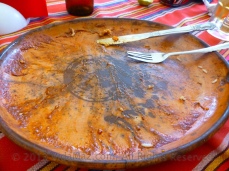 Not sure what happened to those enchiladas 😉 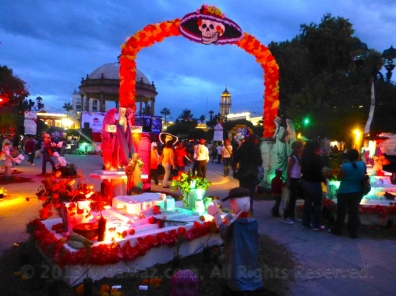 The main plaza in Durango is decked out with katrinas

The main plaza in Durango is decked out with katrinas 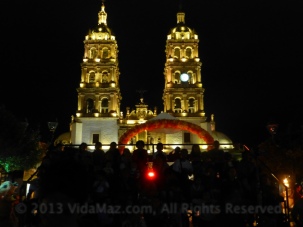 Looking from the stage towards the cathedral 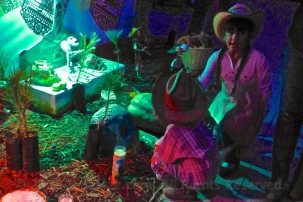 Children and adults alike here dress like cowboys. I almost felt like I was back in Arizona! 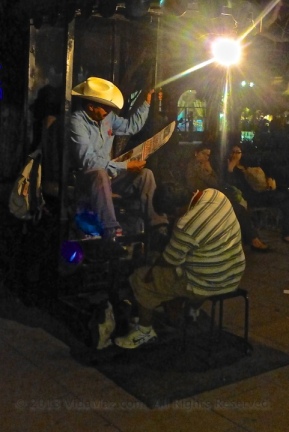 The shoe shine guys really get a workout here in Durango.

Papel picado hanging over the stage

The crowd watching the stage 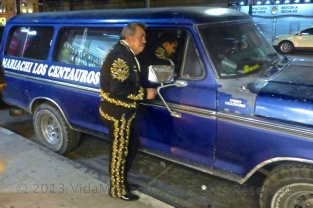 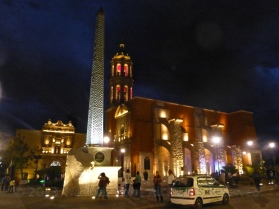 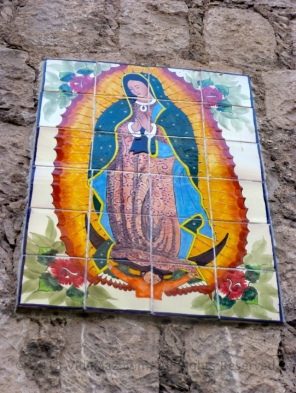 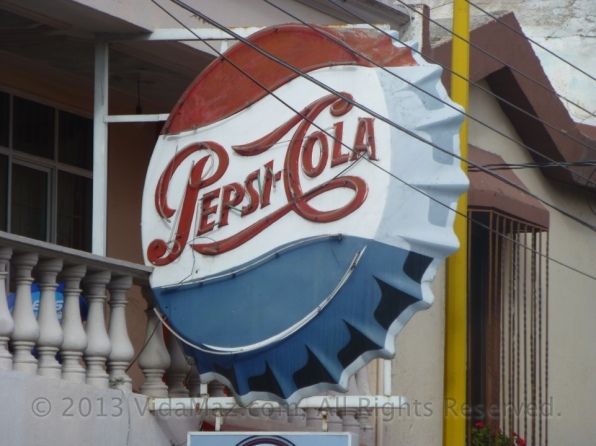 A great old neon down the street from Zorrita.

On Friday night Greg and I wandered back down to the plaza while Danny studied for his test, and there was a children’s folkloric dance group performing. What was out of the ordinary about this one was that the kids all dressed up as calacas—skeletons—and in glow-in-the-dark costumes. The stage was lit with black lights, so it was a pretty cool effect. We enjoyed it a lot.

Just prior to the performance, the little kids had fun posing for my camera. During the performance, shots were of course very challenging, as it was very dark and the kids were constantly moving. They danced to some songs you’d expect—Michael Jackson’s “Thriller,” for example—and they also took us on a tour around México. 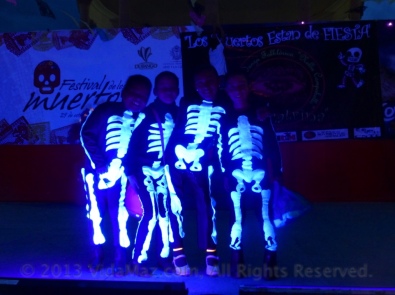 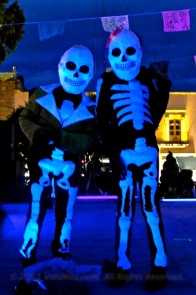 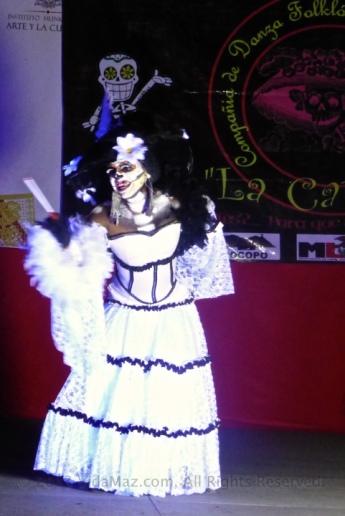 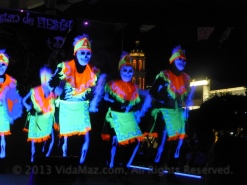 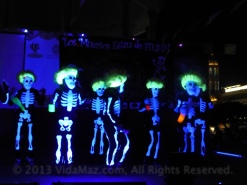 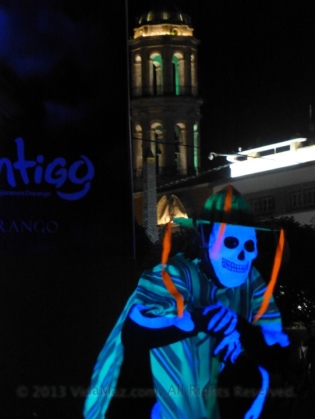 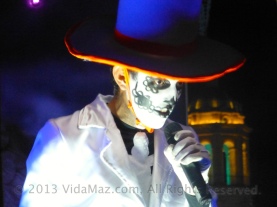 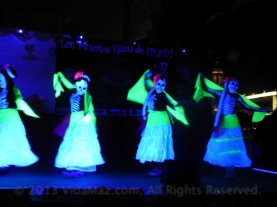 I put together a short (three minute) video of the performance. I trust you’ll enjoy watching it. The kids had soooo much fun in their costumes. They knew they looked great.

On the pedestrian street to the left of the cathedral, just down from Hostal de las Monjas and across the street from our favorite little cenaduría, El Parcero Tacos Bar, is a large funeral home, Funerales Hernández. They had an altar to Jenni Rivera that was larger and more superb than ANY I have EVER laid my eyes on. They called it a “Monumental Altar de Muertos.” It contained dozens of life-sized katrinas, ceramic and sugar skulls, antique and artesenal chachkes, Jenni Rivera music playing (not too loud), a mini disco ball for effect, and gorgeous paper work. Just take a look: 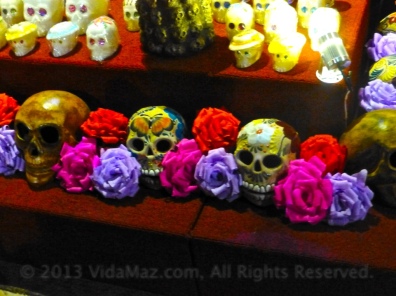 Closeup of some of the painted ceramic skulls, below, and sugar skulls, above

Check out the dancing katrinas, the musician katrinas…

The papel picado hanging above the Monumental Altar

The flowers are real! The candles are real! Dozens of skulls of every sort

The left side of the Monumental Altar. Look closely!

On our way back to the hotel, we walked by the old Palacio Municipal. It was all decorated for Day of the Dead, too. Those photos are below.

The huge central altar in the Palacio Municipal

One of Greg’s favorites, a charicature

One of the many papier maché katrinas

One of the many papier maché katrinas 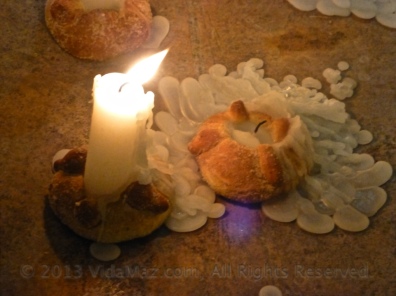 Papel picado hanging over the altar, from the second floor ceiling 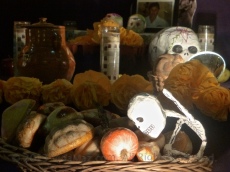 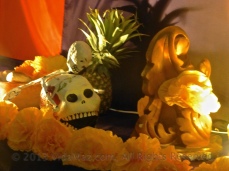