Santa Clara is about an hour’s drive south of Morelia, just south of Patzcuaro. We had intended to spend Easter Sunday here in the city, but after attending Mass at the cathedral, we felt small town life calling us (as usual). We wanted to see copper making, since I grew up with it in Arizona, so off we went.

What a charming small town! I absolutely fell in love with the young boys, ages 3-8 or so, who were dressed as typical Michoacán viejitos for the Easter procession. More on them later. 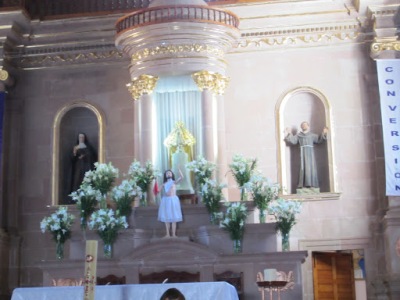 One of the two main churches in town is home to Jesus of the Resurrection, so Easter Sunday is, luckily for us, a big feast day. Later in this post you’ll see video footage of the very community-engaged, charming Easter procession. 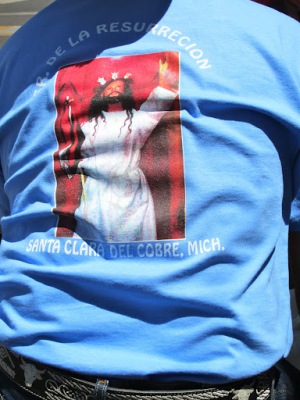 We noticed a sign outside the church here that we found so interesting we just had to take a photo of it, left.

Also, I made a new girlfriend, who was more than happy to pose for a photo for me. 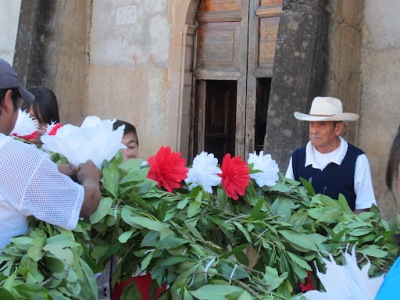 When we arrived in town, about 11:00 am, people were just putting the finishing touches on some decorations. Those included assembling beautiful red-and-white-arches in the center of the street, in front of each of the barrios of Santa Clara del Cobre.

When we asked what they were preparing for, we were told there was going to be a procession. Where? When? “Right here. Ahorita.” Well, we’ve lived here long enough to know that ahorita doesn’t mean “right now” in any gringo sense of that word. So, we knew we had time to check out the town.

The decorations also included crepe paper flowers and streamers in front of nearly every house in town. It was truly a community event, and involved all ages. 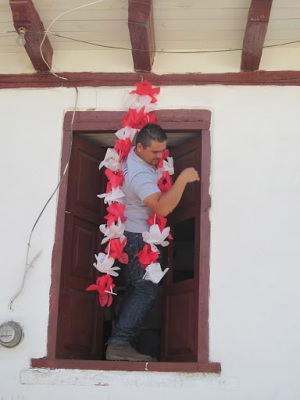 We saw a long line in front of the newer church, the one that’s in the plaza. We figured it had something to do with Easter.

Approaching, we saw the priest signing a booklet for the children in line. Well, that looked all too familiar! In asking, a mother told us that the children who want to receive First Communion this spring had to attend the 9 o’clock Mass on Easter, and they had to have the priest sign their booklets attesting to that fact. Gotta love legalism.

We figured the procession would start after the noon Mass, so we took a look through what appeared to be the old original church. It was gorgeous! Everything here in town was so well cared for. 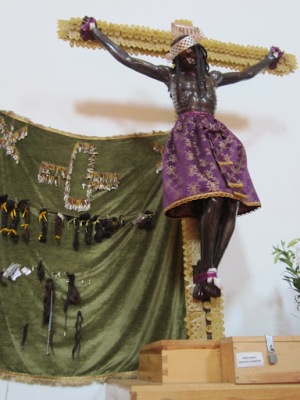 There were quite a few braids of human hair pinned to the cloth behind the crucifix, along with quite a few small milagros.

Every building was occupied, every curb was maintained, there were sidewalks and people sweep them on a daily basis. It was terrific to see.

Beside the old church was what seemed to be a community center. There were obvious party preparations going on, and during the mid-day people kept streaming in with food, food and more food. And music too, of course. 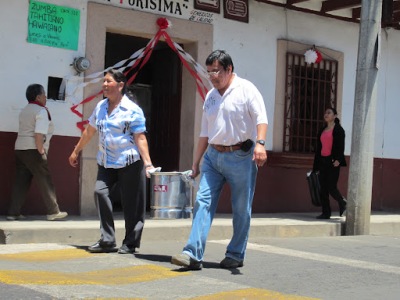 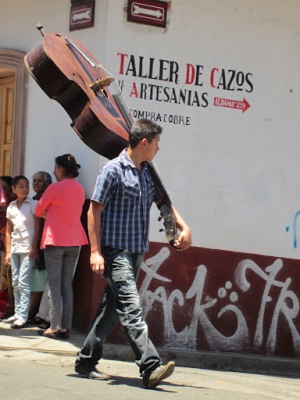 Still no sign of a procession to begin ahorita, we walked through the copper fair that was going on in the main plaza. There we met Pito Pérez, reincarnated, selling DVDs of movies about his life. 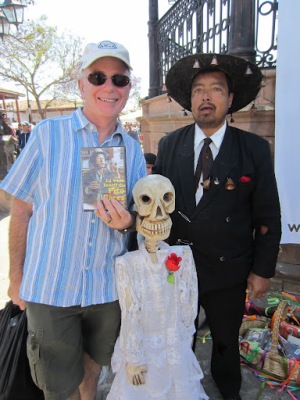 Coming back to the other side of the plaza, we saw that the crowd was gathering to view the procession, so we took our place on a curb.

Once the fireworks launchers were in place, we knew it was time. They used really handy iron stands to launch 6-14 bottle rockets in a row. I think Mazatlán needs these!

The video above is about three minutes of the procession. It lasted a good 90 minutes or more. It involved so many people, as we’ve witnessed in so many other small Mexican towns during Semana Santa. It included a Santo statue from each of the barrios of the town, I believe, plus the town patron, the Jesus of the Resurrection. This is not a performance so much as a community-wide event, as are our beloved Carnavál parades in Mazatlán.

The most charming part of the parade, for me, were the children dressed up as typical Michoacán viejitos, or old people. Normally this is a folk dance, but this time they merely walked in the parade. By the end they were pretty hot and tired.

After the procession I saw a group of four boys sitting in the plaza. They were obviously the viejito boys, though they had removed their hats and masks, and several of them had even taken off their zarapes, because they were hot and tired. They looked so cute. I asked them if I could take their photo, so that of course ruined the spontaneity of the moment. But, marvelously, they called all their friends over, they all got completely re-costumed, and they gleefully posed for me to take their photo. I will post this blog to a few town sites, in hopes that the kids might see themselves. Thank you, niños!

Afterwards people seemed to go into the community center to eat, and to take home the leaves from the arches, and many of them also took home large sugar cane stalks. We hadn’t seen those till now, so I’m not exactly sure where they came from.

Thank you, Santa Clara del Cobre!!! We were very blessed to be able to share our Easter Sunday with you! We appreciate you including us in your festivities.