We are soooo happy about the new skate park that was built late last year right on the beach in Playa Norte, accessible from the malecón. Built with federal funds and after lots of campaigning by the city’s young people, it is a MUCH-needed space for teenagers to gather, stay out of harm’s way, and get some exercise.

Every morning when we take our walk, we’re amazed that there are kids out there fooling around so early. They’re on BMX bikes, inline skates, as well as skate boards. They have their music blasting, and it’s terrific to see all those smiling faces and physically active kids!

We’ve been a bit worried that construction didn’t seem to include reinforcement of the underlying structure, which to us seems really weathered and rusted, but so far the structure seems stable and the park itself, with its ramps and jumps, seems highly successful.

The first major event we know about occurred when we were out of town: Urban Fest on December 17, with break dancers and graffiti artists as well as skateboarders. We heard the turnout was great; a wonderful kickoff to the new space!

One day last week when Danny was running he met a lady who told him that she and her three children had lived for 32 years in the abandoned beachfront building that is now under the new skate park! That space is open to the elements, frequently floods with the tide coming in, and as far as we know there is no running water or sewer nearby, so it must have been quite a tough life for her raising three children there. She makes her living by selling fresh coconuts, and fortunately she told Danny that her business is on the uptake now with the skate park there. The other good news is that, when the government kicked her out in order to build the skate park, they gave her land and a two-room house. Now she has much better living conditions as well as a better income. Sometimes things work out. 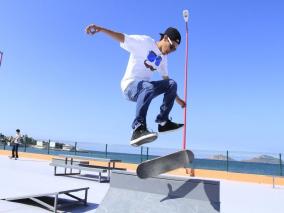 Anyway, this last week Friday we were eating at Puerto Azul on the malecón. We were psyched because in addition to the incredibly beautiful view and perfectly sunny day, there was great music coming from the skate park next door. A huge crowd gathered, and it felt like the vibra of the old, pre-economic crash Mazatlán that we miss so much! Luckily for us, that afternoon was the “Reyes de la Calle” skateboard tournament. We enjoyed an incredible show of skateboard and in-line skate tricks, as well as BMX bike acrobatics and spray paint artistry, while we ate our shrimp and fish. Mazatlecos placed first and third in the competition, and there were about 100 kids who participated.

Below are two videos, made by young Mazatlecos, about the skate park. Enjoy! ¡Viva el Skate Park Mazatlán!

One thought on “New Skate Park”