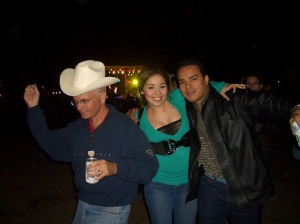 Greg and I were two of over 20,000 lucky people who showed up to the vacant lot in front of the aquarium to watch Verónica Castro crown my favorite banda, El Recodo, the “Kings of Joy” for Carnaval 2009. It was DEFINITELY a night to remember!

El Recodo played for over an hour, as did 11 other bands including Pedro Fernández, Banda El Limón, Huichol Musical, Banda Estrellas de Mazatlán, and the comedian Carlos Bardelli. The lighting on the stages was truly amazing, very high-tech and exciting, and the fireworks were remarkable.
The band is celebrating their 70th anniversary this year. The leader’s mother, Chuyita, who is the widow of the band’s founder (Cruz), and Cruz’s brother German, were both present at the ceremony.
One of the incredible things about this event is that it took place in what, up to that morning, had been a vacant dirt-covered lot. The city came in and plowed out a hill on the lot during the prior week, took out a small old amphitheatre, and the day before the event they installed a HUGE stage and one smaller one, along with 3-story high light mounts.
The lot was fenced off and you had to go through a long line of Federal Police, most people being frisked (we weren’t) before you could enter the party zone (huge lot, now transformed). The party zone was lined with snack booths of all sorts, from tacos to flan to carne asada. Strolling vendors sold hats, masks, noisemakers and toys. There were of course several Pacífico booths. 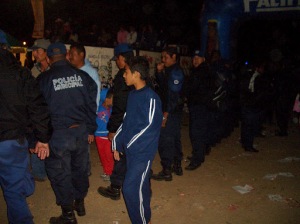 One of the interesting “side shows” was electric shock treatment. A man walks around with two hand-held diodes and a small generator. He gets a group of people together and asks you to hold hands. He gives a couple of people a diode, and he backs away. You get shocked, it hurts quite a bit, and the first person to let go pays 100 pesos for the privilege. Hmm… Greg lost 😦

Another interesting sideshow was the “eyelashes and beard” man, as you can see below. 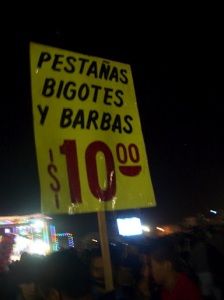 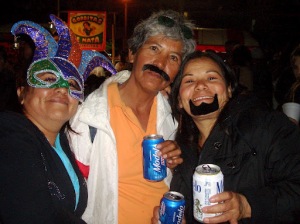 Everyone talked to everyone as instant friends and shared the beer. It was an ideal start to our first Carnaval in Mazatlán. 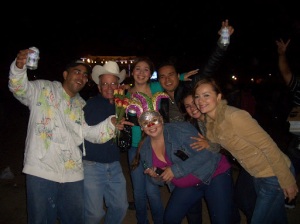