There are so many people in Mazatlán reaching out in awesome ways to help their neighbors. One of them is Amparo López, of the Albergue San Josémaría. The shelter feeds hundreds every day and provides temporary housing for to up to 15 people. They have three locations: the cafeteria, a house at Melchor Ocampo 523 downtown, and a home for the elderly and mentally ill.

Amparo called me today asking for help. The house on Melchor Ocampo is at over-capacity with 16 people residing there right now, and two more people arrived today asking for a place to stay. She desperately needs another home to house people in during this crisis, as she doesn’t want to force people onto the streets. If you have a home available, please won’t you reach out? Her phone number is 669-123-3539. The house can be completely empty; she has cots, sheets and pillows. It can be located anywhere in Mazatlán.

Amparo is also desperately requesting used men’s clothing. Any clothing will help, but she is especially needing men’s. And, of course, your donation of tortillas, eggs, any sort of food or money, will help, too.

I know many of my posts lately have been about helping out. I’m sorry about that. It is insane how many people are unemployed and hungry right now. It’s our time to help if we can. Thank you all and bless you! 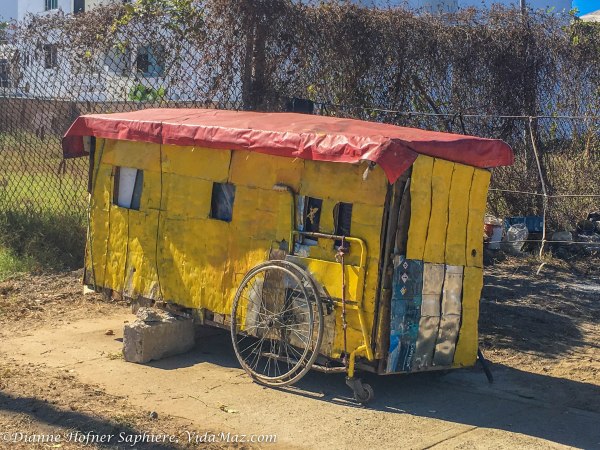 UPDATE 2 FEBRUARY:
Greg and I took Octavio to the doctor’s appointment that DIF had arranged. That doctor ordered an x-ray of his leg and gave him two boxes of pain medication. DIF wants to enroll Octavio in Seguro Popular, so he can get insurance and, thus, get care. However, he does not know his birthday, and it will take weeks to get a birth certificate and get him registered. Greg and I therefore offered to take Octavio to get the x-ray done, just so he could know his options and not have to wait so long. He will still get his birth certificate and register with Seguro Popular. The x-ray doctor recommended no surgery be done as all was healed, but said Octavio needs an insert in his shoes so he can walk better. He also needs a good cane, if any of you have one. We then took him to get the insert, but were told he needed a prescription from an orthopedic. One happened to be next door, so we took Octavio there. That doctor agreed that no surgery should be done. We will pick up the inserts today, and have a gently used pair of shoes for Octavio as well. We are hoping DIF will get him the medicines he needs and the inserts on an ongoing basis (every four months). I am hoping the kind ladies from Ojalá who so graciously offered to help might pay for the care he received yesterday; I’ll submit receipts to them. If you have a job that Octavio could do for you: painting, garden clean up, etc., he is very eager to work.

UPDATE 31 JANUARY:
I was able to get DIF involved. Dorita came out to interview Octavio, take photos, and approve him for a medical exam. They confirmed he is of sound mind, not on drugs or alcohol, and wants to get his life back. Greg and I will take him tomorrow and hopefully we can proceed towards treatment. Octavio will need official identification, which he does not have. That starts with a birth certificate, from Durango. So, after visiting the doctor, we will head to the Unidad Administrativa. A group of ladies from Ojalá has kindly offered to help with at least some of the medical expenses, depending on what they are. Please keep your fingers crossed!

This morning I drove past an amazing sight—a bright yellow and red metal box, supported by cement block and the wheels from a wheelchair, which very much looked to me to be someone’s home. It had an angel hanging in the window, was made from recycled materials, and stood out to me for its ingenuity and joy. I called out hoping to find the owner, but no one answered.

The thought of who lived there haunted me all day, so this evening I decided to go back for a visit. Greg and I took some soda and water, as well as some money. Sure enough, there were two people there this time around. Could a couple be living in that homemade mobile home?

No. The owner, creator and resident of this practical beauty was the man, Octavio Castillo Silva. We found him intelligent, well-spoken and open to talking with us. We were told the lady with him, Martha, does not live there. She was a very different sort of person. 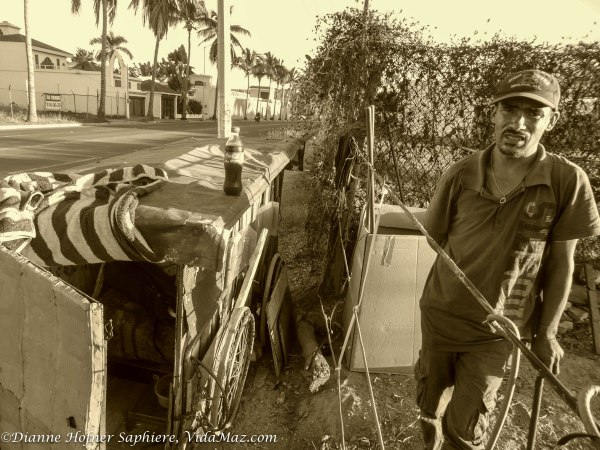 Octavio comes from a rancho in Durango state. He came to Mazatlán in 2006 with four of his ten siblings. He tells us he loves it here, and was doing fine until two years ago when he was hit by a car. After the accident he spent eight days in the hospital, but couldn’t afford the surgery required to fix his leg. He showed us scars on his head and a misshapen left ankle wrapped in an Ace bandage. The leg looked very painful, and Octavio walks with a pronounced limp. He gets around with a cane that he has made out of recycled material.

Unlike many who are down on their luck, Octavio did not complain. He asked us for nothing. He told us he’s lived in his mobile home on the property behind Torre Azul and Banjercito for about two years. The owner has given him permission to stay there in exchange for cleaning up the lot. Octavio is excited because he also has permission to park cars there during Carnavál, and split the proceeds with the owners.

He explained that since the accident he has not had enough money to rent a room. He finds it difficult to find a job due to his injury. To get by, he collects recyclable material. He’s so enterprising that he assembled his home entirely out of recycled wood, plastic, metal and canvas. He is very proud that the walls are well-insulated: three layers thick, with four windows on either side. Octavio told us he stays warm in the winter and cool in the summer. When the cars drive by there’s a nice breeze. The roof of his home has both plaster and two layers of lona/canvas. He used the parts from a wheelchair to make his home movable. He bathes in the corner of his home, and has a makeshift mattress down the center.

Octavio sleeps during the day so that he can go out collecting recyclables at night. The trouble is, while he’s gone people steal his things. So, he’s taken to locking everything inside his shelter. He even locks himself inside while he sleeps, because he’s had trouble with “rateros.” He proudly unlocked his home to show us the inside, which he has appointed with care. Click on any photo to enlarge it or to view a slideshow.

The chain and lock

Two layers of lona plus yeso

Octavio would love to work for a living wage. Might you know someone who needs a security guard? Or who would donate medical assistance? Perhaps one of our readers is a surgeon who would donate her/his services, or would pay a surgeon to mend Octavio’s leg?  Here is a short video we recorded:

If you’d like to help Octavio out in a smaller way, I’m sure he could use food and drink. He’s made an outdoor kitchen for himself. When I asked him if he wanted anything, he said no, things just get stolen.

I will make sure that DIF knows about Octavio, and I plan to talk to my doctor to see if he might help him. We will keep him in our prayers and take him any leftovers from now on. God bless this creative, optimistic, hard-working soul! And thank you for your help. 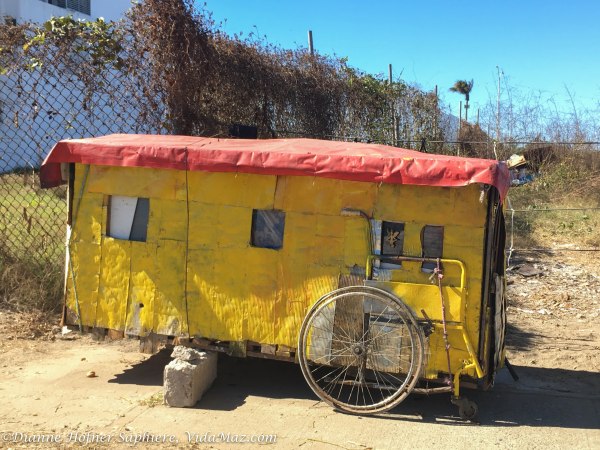 UPDATE 31 JANUARY:
I was able to get DIF involved. Dorita came out to interview Octavio, take photos, and approve him for a medical exam. Greg and I will take him tomorrow and hopefully we can proceed towards treatment. Octavio will need official identification, which he does not have. That starts with a birth certificate, from Durango. So, after visiting the doctor, we will head to the Unidad Administrativa. A group of ladies from Ojalá has kindly offered to help with at least some of the medical expenses, depending on what they are. Please keep your fingers crossed!