My neighbor Daniel owns the big lot just in front of Colegio el Pacífico, at the top of Olas Altas where the “castle” used to stand. Last year when I was on the roof of the school photographing the fireworks of Combate Naval, we saw him and his friends down below on their lot, having a nice party. Greg and I said to each other, “what a great site for a party place.”

Well, fortunately, Daniel seems to have thought so, too. I feared they might be building yet another tower on the property, but the workers assure me they are only filling in and leveling out what they dug up of the old chalet on the hill, planting grass, installing bathrooms in the downstairs of the home, and building an office street side. Yeah! Some green and less cement in Mazatlán! According to the construction workers, the place is to be a salón de eventos.

I visited yesterday to take a few photos while the antique home was still a bit revealed. You can see the commanding view it had. I was astounded how solidly built the home was; even after a century of abandonment, and being buried, the walls stand strong, the plumbing is still in place. Click on any photo to enlarge it or view a slideshow. 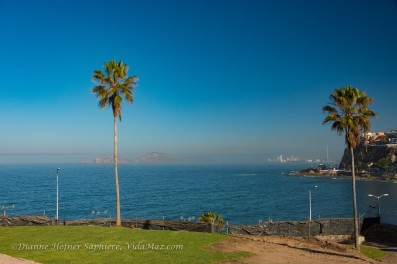 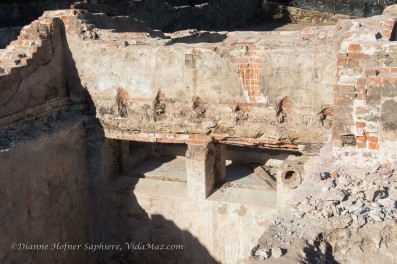 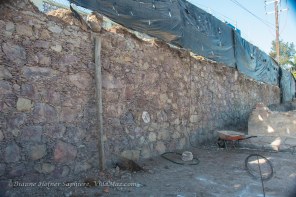 You may have heard of the misfortune that has plagued that home. We’ve been told that anyone who builds or lives in a home there will die. Scary stuff.

Enrique Vega Ayala, official city historian, has written a history of La Quinta Echeguren, the palatial home that stood on the site, for Amigos de Mazatlán. I’ll summarize that article in English for you, below.

Family History in Mazatlán
Don Pedro and Don Francisco Echeguren y Quintana established businesses in Mazatlán in the 1860s, even though they continued living in Spain. They quickly became one of the richest families in Mazatlán, owners of various mines—including the Guadalupe de los Reyes in Cosalá—businesses, industries and properties. By 1863 they were the owners of the majority of all mining operations in our region.

Don Pedro Sr. died in 1877 and his inheritance was distributed between his widow Doña Concepción Moreno, his five children and his brother Francisco. The “Compañía Echeguren Hermanos” changed its name to “Francisco Echeguren, Sister and Nephews.” The sister and nephews ignored the Mazatlecan business. Three of Don Pedro’s four daughters married French and Spanish noblemen: the Baron of Dampierre, the Viscount of Chollet, and the Count of Mayor. Only the husband of the youngest, a wealthy Spaniard, ever made an appearance here in the port to check on their businesses.

Don Francisco held the family business until 1901, when it was transferred to Pedro Echeguren y Herrerías (Jr). It’s probable that he paid part of the reward for the capture of Heraclio Bernal, the generous bandit who ravaged gold and silver from the mines and interfered with the fortunes of the Echeguren. Under the protection of the good relations that Pedro Sr. and Jr. had cultivated with Sinaloan Governor General Francisco Cañedo, their income increased even more and very quickly.

Pedro Echeguren y Herrerías (Jr) is the one who built the chalet on Paseo del Centenario and who sought to maintain a life near his businesses here, even if during only certain seasons of the year. Pedro Jr. died in 1907. After his death no one wanted to take direct responsibility for the businesses: La Mercería Nueva (the new haberdashery), Almacenes Echeguren (warehouses), Guadalupe de los Reyes Mining Companies, the textile factory in Villa Unión, the Water Supply Board, and innumerable real estate properties came to be administered by agents in Mazatlán. The family’s riches here that had been built over 50 years soon went broke. The family’s influence declined not just because of its loss of fortune but also due to the Revolution.

The Castle on the Hill
Formally called “La Quinta Echeguren,” the home was designed and built in the late 1800s by architect Elizalde from San Sebastián, Spain and built by Ramírez y Cia. It would burn down twice and its inhabitants would suffer many misfortunes, leading to rumors that the lot is cursed.

Long after the home’s heyday, local newspaper Correo de la Tarde of September 13, 1944 said this: “Mr. Echegurén, desiring to bring his wife who lived in San Sebastián, Spain to this city, wanted to give her the impression that he had transplanted their finca from home. He brought photos and plans to build La Quinta, an exact copy of the house in which Mrs. Echeguren lived in San Sebastián. No detail was forgotten: they built gardens just like at home, bedrooms, the orientation to the ocean was the same. They planted similar plants, brought over the same furniture, rugs and wall hangings, even the acoustics were the same. They didn’t forget the exotic plants and animals, either.”

However, “When Mr. Echeguren started the journey to bring his wife, she died, and they would never live in the home he had especially designed for her. In this way the Quinta remained generally uninhabited, with only the caretakers cleaning and maintaining it.”

Huge parties were held at the Quinta in the late 1800s, hosted by Doña Plácida Herrerías de Echeguren. Amado Nervo was a reporter at the time for the Correo de la Tarde and discussed the parties in some detail. Sadly, the lady caretaker of the house died in the bubonic plague in 1903, and, according to Dr. Martiniano Carvajal, the Junta de Caridad burned the home due to its location in the neighborhood where the plague originated.

One year after the house burned down it was rebuilt even bigger and better. The main house was 27 meters long by 20 wide, and on the ocean side they built a three-story section. The servants’ quarters were on the ocean side, 16 meters x 10, and below that was the wine cellar. Dining room, smoking room and living room were downstairs. On the second floor were five bedrooms, various living rooms decorated luxuriously, a bathroom, a lookout, and a terrace. The residence had three servants’ apartments with bathroom and dormitories. The building was 20 meters tall with another 5-meter tower. 80 men worked on its construction. Rocks in the walls are from the cerro. They lowered the road so carriages could get up it more easily. The new one would be better than the one that was destroyed, more elegant.

On September 12 of 1944, however, the Quinta de Echeguren was semi-destroyed in a huge electrical and wind storm. Lightning hit the lightning rod of the home but the ground for the rod wasn’t fastened down, causing the home to ignite. Firemen and police were called about midnight; the second floor was lost but they were able to save the ground floors.

That’s when the rumors started: two fires, the supposed death of Pedro’s wife, the death of the caretaker, bubonic plague… black rumors about the house.

Vega Ayala cites Cleotilde Bernal: “The Quinta was gorgeous. It had parquet floors and decorations brought from Europe, very luxuriously furnished. It was almost all wood, only a few walls were made of brick. The floors and staircases were all fine wood. The Quinta went unoccupied until they rented it to the Corvera-Gibson. The wife had been Carnaval Queen in her youth. They paid 600 pesos in rent, which was a lot of money, a fortune, but Mr. Corvera was the owner of the textile factory in Villa Unión and had a lot of money. The house still had the original furniture, but the renters replaced it with their own and stored the originals below the house. I took care of the children of Doña Carmen and Don Bernardo until they left Mazatlán. Then a family named Páez lived in the Quinta. He got sick from tuberculosis and died in the house. His family left, leaving the house alone. That’s how the home was when it was hit by lightning.”

So, maybe rumors of a curse have saved us from yet one more condo tower! I will say I’m happy to be getting some grass and an open view!