Last night, immediately after the big Mayweather-Canelo fight, we headed over to the Banda MS concert in Salón Bacanora. The band was celebrating its tenth anniversary, and we were ready to have a good time!

There were several opening acts leading up to the main event, including Proyecto 5, Banda Legal, and Horacio Placencia.

Banda MS came on stage at exactly midnight, as planned. We were shocked! They looked incredibly sharp in their Independence Day garb. I don’t think I’ve ever before seen colored flies on men’s slacks! You can click on any photo below to enlarge it or scroll through all the photos.

Fireworks over the stage

Pan of the crowd 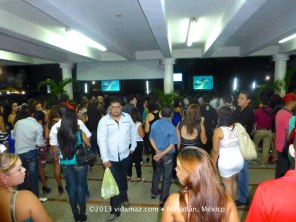 The entrance with screens for the fight

Last night’s was not the most polished performance we’ve ever seen. Despite being their tenth anniversary, playing en casa/at home, and amongst their friends and families, the band didn’t exactly seem into it, as you can tell from the clips below.

The audience was huge, but very calm. There wasn’t a lot of shouting or singing aloud as we usually experience at a banda concert. There were many couples, and way more groups of women than is usual at such an event. We saw some wonderful pointed tribal-esque boots and rhinestone-bedecked belts, and dancing that made me feel I am never going to get the right banda moves.

We in Mazatlán have experienced SUCH a long drought without banda concerts (other than the annual Coronation of the King of Joy during Carnavál), that even last night’s lackluster performance was still very welcome.