The Grito de la Independencia—“shout of independence” or “cry of Dolores“—is a traditional Mexican affair that you owe it to yourself to participate in at least once while you live here. We’ve done it a few times both here and on the 200th anniversary in Guadalajara.

In Mazatlán it happens every 15th of September at 11:00 pm in the Plaza República. The Mayor comes out on the balcony of city hall to ring a bell, shout the official words, and lead the crowd in the national anthem. Most of the country shouts at midnight, but since we’re an hour earlier here on the coast, we do it to coincide with them. Before the mayor’s cry there is folkloric dancing, singing (this year was Heidi Herrera) and other performances, and there’s always a name act that plays after the grito. The first time we went, that act was Chuy Lizárraga, who due to sound malfunction sang right over the national anthem. Click on any photo below to enlarge or view a slideshow.

Cathedral of the Immaculate Conception

The Grito or Cry of Independence

Street vendor in the plaza

This time we read in the paper that the fireworks were going to be fantastic, put on by the same group that does Combate Naval‘s Carnaval fireworks— Lux Pirotecnia (Jorge Márquez) of Mexico City. That was more than reason enough for me to want to go! I love fireworks (5, 4, 3, 2, 1)!

Poor Greg was tired as he’d just driven us from Wisconsin to Mazatlán, plus he had a cold, but when two girlfriends cancelled out on me, he agreed to go despite my assurances that I could go it alone. I was excited to try out my new camera with a brighter lens!

As it’s new, I’m not that good with it yet, so I missed many of the photos I wanted, and I overexposed a few because we were so darned close to the action and you just can’t predict how bright a firework is going to be. Plus, the cathedral wasn’t really lit up, and I wanted it to appear in the shot without having to do a composite. 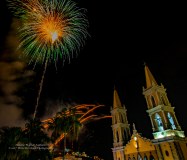 All in all, though, I’m happy. I did get a few good pics; hope you agree. Greg got a great one of the flag and the cathedral; congratulations, sweetheart! And the view we got of the grito itself (above) is sure a different one than the press photographers took. 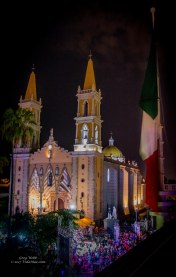 If you’ve never done the Grito, or if it’s been a long while, be sure to do it next year. This year was much less crowded than usual, I guess because the main act wasn’t as popular as other acts we’ve had. There is also a major parade on 15th September every year, including military, police, fire and first responders, and school children. Many children dress up as heroes and heroines of the War of Independence, so attending the parade or visiting a school on the 15th can be very much fun.