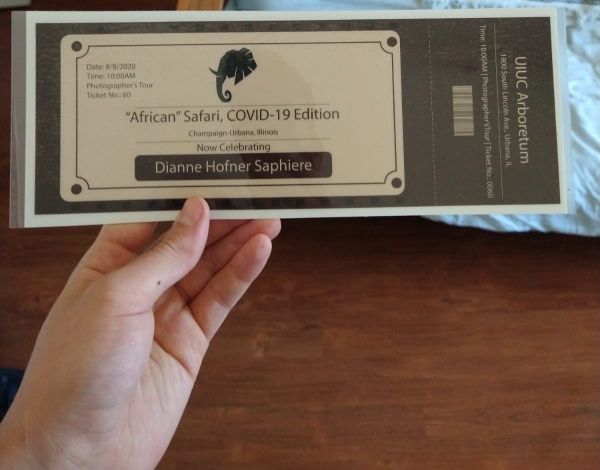 We all curse COVID every chance we get. That wretched virus has hurt so many in so many ways. I was one of the lucky ones: so far it has only robbed me of the 60th birthday African photo safari that I was so looking forward to. Greg and Danny, however, arranged an amazingly marvelous and surprise substitute.

On my birthday I received a gift-wrapped safari hat and binoculars. Hmm… Then I opened a box with a laminated ticket from the local arboretum (photo above). It was for an African Photo Safari on Saturday morning at 10. What in the world could it be? The arboretum doesn’t have animals, especially not African ones. Both of the men in my life were mum; it was to be a surprise.

On Saturday morning I packed up my camera gear and put on my sunscreen, and we went to the park. Upon arriving we suddenly started hearing sounds from the savannah! What?! Turns out the sounds were coming from a wireless speaker in Greg’s backpack. Next, Danny’s phone dinged with a text message.

“Hello, Dianne, and welcome to our private safari tour. My name is Ubiyaongashalita and I will be your guide today.”

What? No group tour? This was all planned by my two incredible dudes???!!! That professional-looking laminated ticket was a fake?! Was there really a guide? Or was Danny making this all happen? How exciting! And confusing. I sure did feel loved. And a bit skeptical… 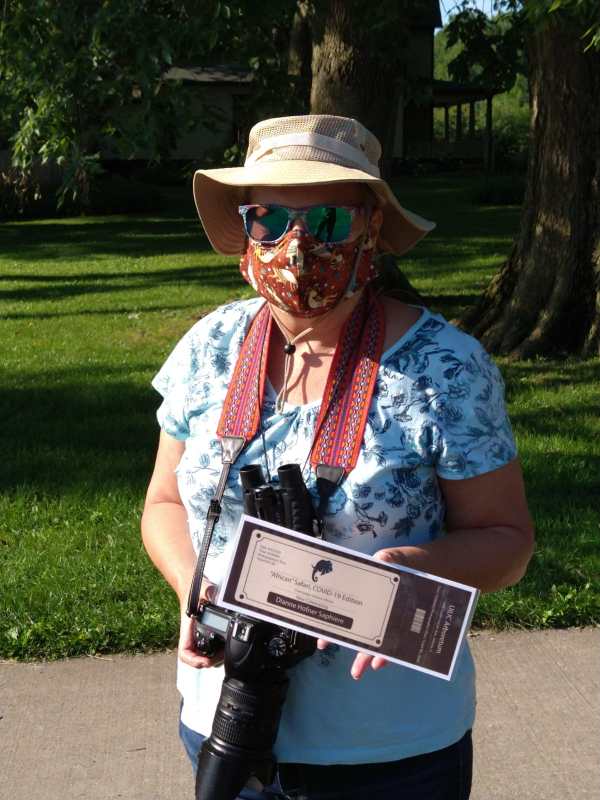 Just like I imagine a real safari to be, the animals weren’t just waiting around like in a zoo; we needed to know their habits and habitats and search to find them. The guide instructed us via text how to locate each animal on our tour. How cool! The clues were very helpful, e.g.,

“The first animal we will look for is the monkey, a tricky animal that does not respect human laws and is always looking to steal their food.”

There was a nearby community garden, so I knew that monkey would be in there. But what was I looking for? A stuffed animal? My husband and son acting like monkeys? I had no clue. The first animal, therefore, was by far the most difficult to find. Click on any photo to enlarge it or view a slideshow. 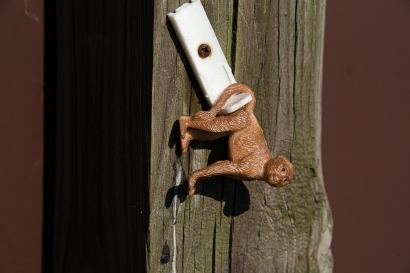 It turns out the animals I was looking for were those one-to-two inch tall kids’ toys—far from easy to spot in a huge park! More clues followed, such as:

To give you an idea, the alligator was in a birdbath in the middle of a flower garden; the gorilla was on a fence post in front of the tool shed; and the rhino was on a steel statue of something tipped-over. Some of the clues contained puns—that’s when I knew that Danny had written them: “Rhi-no you are loving this tour” or “The meerkat is so small we ‘meerly’ missed it!” It turns out Danny had visited the park the night before after work and placed the animals there. How did no one that morning pick up any of my treasures? I was amazed that they were all still right there, hidden in plain sight!

To get the shot I had to lay on the ground, kneel, stretch really tall, get dirty and sweaty… the photography bit was definitely realistic. Fortunately I did not have to run away from anything chasing me!

Another extremely cool aspect of the safari was that it included sightings of the Big Five: the leopard, lion, African buffalo, elephant and rhinoceros! All five in a single morning; can you imagine? Greg had very resourcefully purchased a coin for each of the Big Five animals. In the video below he presents me with the Rhino coin from Zambia.

The safari was a whole lot of fun. One of the biggest joys was watching the reaction of the people who were also enjoying the park. “What’s that sound?” “Did I hear an elephant?” The kids got so very excited! “Daddy, I hear a stampede!” Quite a few of the kids got jealous, though, which made me feel bad but was also pretty humorous: “Mom, I want a toy zebra like she just found. Let’s find some for us!”

The final animal on the safari was the elephant. The clue included these words: “In my village we commemorate the elephant with a dance, usually done in pairs. You and your husband should try it.” Of course the elephant was on the base of a statue of two dancers! Below is me doing the happy dance as I receive my final coin. Geek alert!!!  😉

After the safari we went to the only African restaurant that we could find in the Urbana-Champaign area. It was really good and the air conditioning was most welcome, too.

I still hope to make the trek to Africa and participate in a photo safari. In the meantime, however, I’ll be busy putting together a shadow box of my animals and coins! Bless you, men! I do love you dearly and am so very blessed that you are my family!