The December party season is exhausting. After the holiday, wouldn’t it feel wonderful to chill out for a couple of days in the middle of a spectacularly biodiverse rain forest, in a large, clean cabin with killer views, incredible stargazing, a full kitchen and all the modern amenities?

Every year tourists from over 25 countries are drawn to this very spot, home to a world-renowned breeding program for green macaws, aiming to rescue them from extinction. This gorgeous nature preserve has a semi-Olympic pool, tennis court, dozens of kilometers of hiking trails, waterfalls, petroglyphs, a museum, aviary and several climactic zones. You’ll witness breathtaking sunrises and sunsets, and amazing stargazing both with your naked eyes as well as through an astronomical observatory telescope. 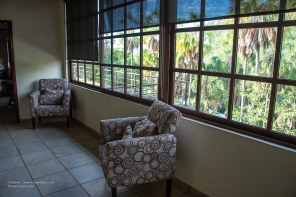 How far do you have to travel to get to this magical place? Costa Rica? Malaysia? Chiapas? No, the Reserva Ecológica de Nuestra Señora Mundo Natural is right here in Sinaloa, just three hours by car or bus from Mazatlán—twelve kilometers east of Cosalá. It’s home to the most important macaw rescue program in northwestern Mexico, a two kilometer long zip line that is the second highest in the country (500 meters), and an astronomic observatory that partners with observatories in Russia, Chile and New Mexico to monitor near-Earth asteroids and space junk.

Not only is the nature preserve nearby, it’s affordable—because it’s part of our state university, UAS: Universidad Autónoma de Sinaloa. A three-bedroom cabin (for eight people) with loads of natural light, air conditioning and a full kitchen costs 3000 pesos/night; they also have hotel and hostel rooms for 800 pesos/night. You’ll want to be sure and spend the night: the reserve closes to the public at 5 pm and opens at 10 am, so sunrise, sunset, moon and star gazing are not available to day visitors but only to those smart enough to spend some time here. The wild macaws are also best seen at dawn and dusk, yet another reason to spend the night here. 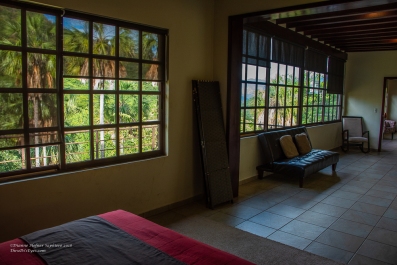 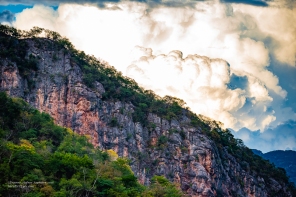 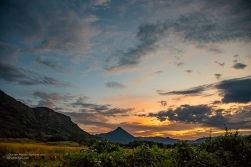 The 60,000 annual visitors to the reserve come for the incredible biodiversity of the area. You may also meet some of the domestic and international scholars conducting research here from Guadalajara, UNAM in Mexico City, Brazil, Chile, Spain and the UK. Fauna you’ll probably see include the green macaws that the area is famous for, plus white-tailed deer, coati, ocelots, lilac-crowned parrots, iguanas, gray hawks, owls, and a few things you may want to avoid: rattlesnakes and tarantulas. Flora-wise there are loads of braziles, amapas, mautos, moras, higueras, apomos, flor de Santiago, sabinos, rosarillas y papelillos and mangos. Should you wish to hold a workshop, large meeting or party here, there is even a conference center with closed circuit TV, a restaurant and space for up to 200 people! 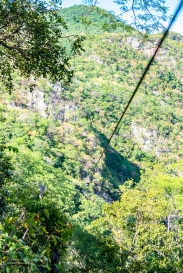 During my visit there were several groups of students visiting from UAS. They conducted research in nature during the day and enjoyed pizza parties at the pool in the afternoon. There was a large family reunion, with family members coming from different states to meet up here, just outside Cosalá. Quite a few area businesses conduct employee-training programs here, and the reserve plays host to religious retreats, as well.

The General Manager of the reserve, José Alfredo Leal Orduño, was kind enough to spend a few hours touring me around the property and facilities. He spends the work week in Culiacán, but is at the reserve on the weekends. Leal told me that when UAS was founded in 1968, Governor Sánchez Celis gave the fully functioning reserve property—including hot water, electricity, a huge freezer and about 85 cabins—the equivalent of 260 hotel rooms—to the university as a source of income. It seems the property owner, a mining company, was delinquent on taxes; their loss was the university’s gain. The university, however, proceeded to nearly completely neglect the facility for the next forty years. By the time Leal took over, looting had destroyed 75 of the original cabins. What remained were the two haciendas on the property, which had been used by the mine superintendents, and the service buildings. The original structures were remodeled to become the cabins, hotel and hostel we see today. The rooms are a pleasant mixture of historic, rustic beauty on the outside and modern convenience and aesthetics on the inside. 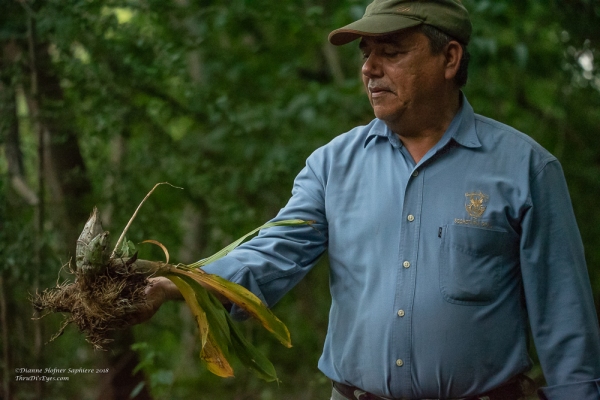 All cabins have hot and cold running water, air conditioning, private bath, and a full kitchen with refrigerator/freezer, stove, microwave and coffee maker. While you have a kitchen and can cook when you wish, if you let staff know ahead of time they will arrange for a local woman to come in and cook meals for your party. There are large decks as well as lookouts and rest areas where you can read a book or watch the nature around you. The cabins are accessible by car, making this an enjoyable respite for the mobility impaired, and the reserve’s 18 employees stand ready to help.

If you are physically fit you can take an early morning hike with a biologist from the lower Habitas River Valley, with its mines, petroglyphs and waterfalls, all the way up to the top of the Sierras, through several climactic zones. The reserve is on the border between Sinaloa and the state of Durango.

When is the best time to visit? Leal says it’s winter, November to May, the dry season. Anytime between June and October is when the rain forest is in full regalia, the river is at its highest and the waterfalls their most powerful. He showed me videos of a thunderstorm taken from within a cabin and it was absolutely beautiful—the sound of fresh, wet summer air! Macaw courting season is in February and March, which should be quite the experience, though Semana Santa is always sold out months ahead of time.

60% of the reserve’s visitors are from Culiacán, with a very small percentage from Mazatlán. That is strange to me, since the two cities are equidistant from the nature preserve. What a loss that mazatlecos don’t take better advantage of this terrific public resource! I trust you’ll help me change that reality by visiting soon.

4 thoughts on “Nearly Secret Gem of an Overnight Trip”