Take a moment to think back on a time you jumped into the unknown with little more than trust? Maybe it was when you decided to move to Mexico. Remember the exhilaration? The joy and excitement? The blessings that flow from such a leap of faith?

Today we found kindred spirits in two twenty-somethings from Tijuana who are living life to the fullest in just this manner They are Sergio Vazquez and Iuvet Sanchez, who quit their jobs, sold their homes, cars, business and clothing, and set off with their two dogs, Ponyo and Ginger, on an open-ended journey through Latin America. These two adventurers prepared for their journey for two years, purchasing and renovating a VW bus (“combi” in Spanish) and starting a fan page on Facebook—Viajando por la Libre—so they might meet people along the way and make some new friends. That fan page currently has 13,000 followers, many of whom are eager to host the couple when they arrive in their city. Click on any photo to enlarge it or view a slideshow. 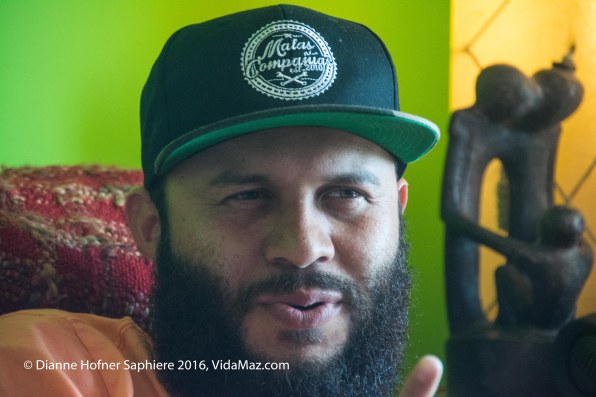 The two were married in Mulege, Baja California Sur, eight months ago. They began their honeymoon trip two months ago, traveling from Tijuana through Sonora and along the US border to Chihuahua and the Sierra Tarahumara: Casas Grandes (Pakimé in Rarámuri), Cuauhtémoc, and Valle de Jimenez. They went through Coahuila to Torreón, and then entered the state of Durango, where they visited the pueblo mágico of Mapimí. I’ve got to visit Mapimí; it sounds gorgeous, and their saint’s day is my birthday! Sergio and Iuvet also loved the nearby ghost town of Ojuela. In fact, they told me that the German engineer who designed the suspension bridge near there—Wilhelm Hildenbrand—also designed the Brooklyn Bridge.

They have obviously learned and seen a lot already, and their trip is just beginning! Their favorite stop thus far has been Durango, where they ended up staying for eight days because they had such a good time. There they were treated like a king and queen, VIPs in every respect: welcomed with a community dinner of discada, entertained in huge and simple homes, given a house in which to reside during their stay, taken out to dinners, tour-guided around, welcomed as friends. Vocho or VW clubs along the way have been unbelievably hospitable to them. Their bus has broken down three times, and each time the people repairing the bus refused to accept payment. Sergio and Iuvet are discovering how good and generous people are, happy to help young people get out and see the world.

Iuvet is a nutritionist who had her own office, and Sergio is an electro-mechanical engineer who worked for a maquiladora in the medical industry. They had good jobs, made good money, owned homes and cars. Neither of them were born to wealthy families; they are representatives of Mexico’s new and growing middle class. Though successful, they could both feel themselves part of the “rat race,” doing repetitive, mundane things in order to buy a better car, a bigger house and nicer things. Iuvet looked around at her female doctor friends, most of whom were very successful at work but not so successful in their personal lives, and she didn’t want that for herself. They were both convinced that life had a lot more to offer.

Sergio told me he has followed the journeys of other travelers for many years: Chilenos, Argentinos, a Frenchman. Most of them traveled in VW buses, and so that has always fascinated him; travelers in combis are “a brotherhood,” he says. The couple took a year-long class on Buddhist spirituality and psychology that they say changed them both as individuals and as a couple, and gave them the confidence to set off on their journey. Both of them see the trip as a chance to let go of ego, which according to Sergio can “grow and grow but never explodes.” They originally dreamed of traveling all of Mexico, but that quickly expanded to include all of Latin America.

Before they started their journey, there was an aunt of Sergio’s who was aghast that they would try to travel in a VW bus. “You’ll never make it up the Sierras,” she chided. Sergio’s eyes fill with delight when he tells me they climbed to 2500 meters and took a photo to prove it to her. While largely a positive trip, the couple has had a couple of scares, one of them with a drunk guy who was convinced they had stolen his van. Fortunately all ended well; they found a safe place to spend the night and left the town at earliest light of morning. They’ve also had a few naysayers on their page, people who scold them for being irresponsible and foolhardy. But, as Iuvet says, “if we don’t take the chance, we then let fear rule our lives instead of love and a sense of adventure, and I much prefer the latter.” We trust their good luck continues.

Iuvet tells me that the trip so far has been nothing like she imagined. In her mind’s eye she saw herself sleeping in the combi, cooking in the combi, bathing in cold water… In reality, during their two months of travel they have only spent a few nights sleeping in their bus, and have cooked only a handful of meals, thanks to the incredible hospitality of the people they have met. Iuvet imagined an austere lifestyle but, in fact, she has gained weight thanks to the incredible generosity of so many new friends along the way. They are fortunate, because looking inside the bus, it is a very simple lifestyle indeed! 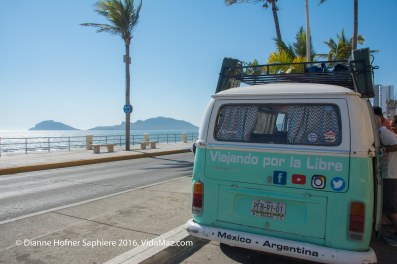 The table for the stove

The back seat folds to a bed

Here in Mazatlán the couple are staying with Iuvet’s cousin, who works at Sea Shell City. They have been loving our beaches and seafood. This afternoon her uncle is barbecuing them some pescado zarandeado; they have plans to kayak to Deer Island, and to chill out on Stone Island. They met with the Mazatlán VW Club a couple of days ago.

The couple do not make plans, and are taking each day as it comes. They’re not sure how long they’ll be in Mazatlán, but want to get out of here before the craziness of Semana Santa and MotoWeek. They do intend to head to Tepic, San Blas and Vallarta from here, and visit her family in Guadalajara. They want to go to Aguas Calientes, San Luis Potosí and the Huasteca, and the Bahía: Querétaro, Guanajuato, and Puebla and Chiapas, before hitting Guatemala. They are not on a schedule, but are open to advice from people along the way on places they should go, things they should do, and people they should meet. They have a fan in Guatemala that corresponds with them nearly every day, asking when they’ll arrive. Their intention is to wind through Latin America until they reach Ushuaia, Tierra del Fuego—the southernmost tip, though already Iuvet mentions the possibility of continuing on to another continent.

Sergio’s parents have been very supportive and encouraging, urging them to travel while they are young and able. Iuvet says her father “almost had a heart attack” when she told him she was giving up her successful medical practice to travel. Now he is respectful of her decision, though he can’t quite understand it.

When I asked what they’d like me to be sure to say in this article, they replied, “Get out and travel! It opens you to new worlds! Don’t put limits on yourself, such as you don’t have enough money. If you want to do it, you can!”

Sergio and Iuvet have been selling t-shirts, cups and stickers to help pay for gas and fund their journey. However, those items have pretty much sold out, and they only sell them live and in person. Greg and I told them about our local t-shirt maker, but something tells me they’re not interested in doing that right now with the ocean calling. So far they are not set up to receive donations, but they may eventually try to get some sponsors for their journey. Sergio loves to write and take photos, and would very much enjoy publishing an electronic book of their adventures. Iuvet enjoys making videos, and has started a YouTube channel.

Readers, I trust you will be able to meet Iuvet and Sergio while they are here. They are upbeat, enjoyable people whose excitement for life is contagious.

Best of luck to both of you, Iuvet and Sergio! We will most definitely be following your journey as well as your advice, and sending very positive travel energies!