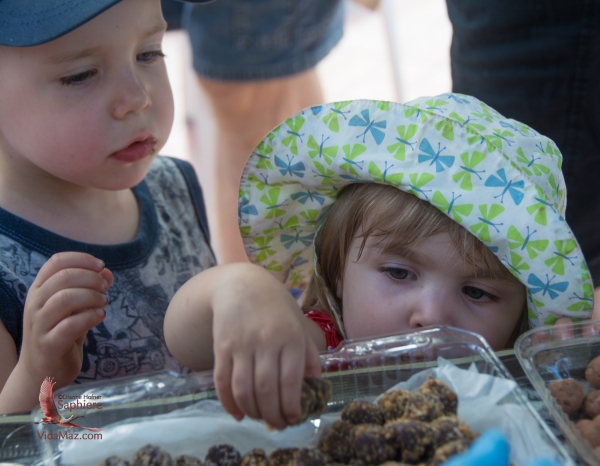 Young shoppers at the Organic Market sample the truffles

Our blessed Saturday Organic Farmer’s Market in Plaza Zaragoza frequently hosts cooking demonstrations, and today’s was about chocolate—Oaxacan organic chocolate, to be precise. I had gotten up before dawn to go bird-watching in Estero del Yugo, but just before 9:00am I dashed south to be able to view the demonstration.

José Itzil López, sous-chef at Raggio Cucina Casual in the Golden Zone, showed us how to effectively melt chocolate, then turn it out to quickly cool—giving it shine and flavor, and then mold it. He also showed us how to add a liquid such as coffee to make truffles. Then came the best part—the sampling. Click on any photo to enlarge it or view a slideshow.

We were shown cocoa “nibs”—what’s left when the outer shell of the cocoa bean is removed after roasting and the inner cocoa bean meat is broken into small pieces. The nibs are then ground into “cocoa liquor”—unsweetened chocolate or cocoa mass. The grinding process generates heat, liquefying the high amount of fat contained in the nib and converting it from its dry, granular consistency into a creamy, gooey mess.

Different percentages of cocoa butter are removed or added to the chocolate liquor. Cocoa butter carries the flavor of the chocolate and produces a cooling effect on your tongue that you might notice when eating dark chocolate.

Itzil melted chocolate over a propane-heated double boiler, to show us how it’s done. Key, as I’ve learned the hard way, is not to burn the chocolate. If you burn it, the chocolate changes color and becomes hard and dry. Itzil told me you always want to see steam coming off the chocolate, always use a double boiler, and never stop stirring. He recommends a candy thermometer as well. If you don’t have a thermometer, you can tell the chocolate is sufficiently melted and the molecules fused if it runs from your spatula in a consistent stream (no breaks in the line) and if it swirls/twirls as it runs off the spatula—see photos below. His chocolate most definitely did both. And it smelled heavenly! 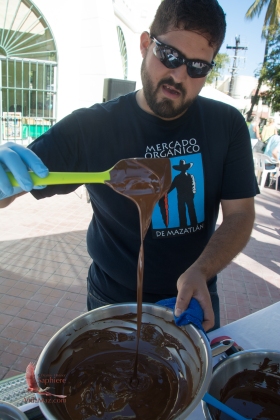 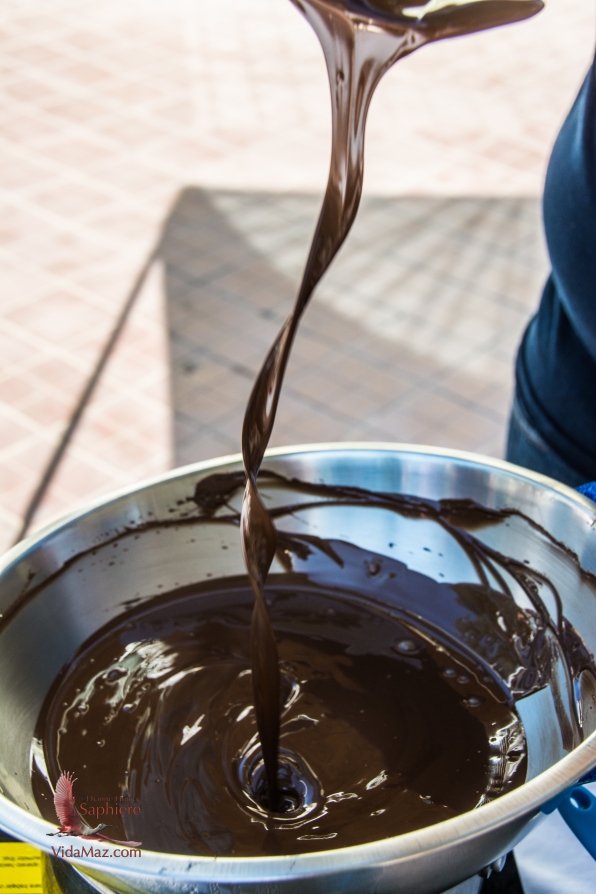 Conching develops the flavor of the chocolate liquor, releasing some of the inherent bitterness and giving the resulting chocolate its smooth, melt-in-your-mouth quality. Itzil told us the key to conching is “shocking” the chocolate by rapidly changing its temperature; thus, he spread the melted chocolate out on a cold stone slab. There he used paddles to knead and mix the chocolate, cooling it down and allowing the granules to fuse together, producing a richer flavor. It has cooled sufficiently when you can comfortably touch the chocolate to your lower lip or inside wrist, must as you would test the heat of milk before giving it to a baby. He molded some of this mix into bars, which got the children attending (ok, the adults, too) very excited. It’s important when molding your chocolate to hit the mold against the counter often enough that you destroy any air bubbles in the chocolate. The air bubbles cause the chocolate to break more easily. Once the molds were filled, he put them on ice so the chocolate would harden.

To the other half of the paddled chocolate he added some hot coffee, and used a whisk to beat it vigorously. He explained that this is how we flavor chocolates for making truffles. Once it cools, you can form it into balls and roll it in the toppings of your choice, or insert a filling. This is the point at which the sampling commenced, and those truffles disappeared awfully quickly! He had truffles flavored with kahlua and mint, and rolled in coconut, nuts and cocoa powder. It was delicious! 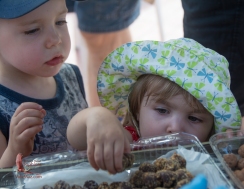 Together with his friend from Monterrey, Armando Villarreal, Itzil has started a new enterprise called “Kimoots.” They tell me they don’t yet have a store, but individuals or restaurants can order chocolate from Chiapas or Oaxaca, chocolate bars (plain, with nuts or fruit), truffles (various flavors), organic cocoa butter, and vegan chocolate from chocolate@kimoots.com or tel. 811-530-5011. You can also obtain this delicious chocolate at Raggio’s Italian Restaurant, or at the Farmer’s Market every Saturday morning during the winter, 8am-noon.