Do you love horses? Do you love an excuse to party, and are amenable to doing so before, during and after you ride 25 kilometers on a horse? Do you have kids who enjoy watching horses dance? If so, you ought to join in the Familia Escobar’s cabalgata or cavalcade next year. The cabalgata is held up in Cerritos on the second to last weekend in January every year, and this time 600 horses and riders, from five states of Mexico, participated.

This was so very different from our first cabalgata—in Jerez de Zacatecas, on Holy Saturday of 2011. That one hosted thousands of charros with incredibly beautiful sombreros, tooled leather and embroidered suits. Here in Mazatlán, it’s puro Sinaloa, baby! Most everyone wore a cowboy hat rather than a sombrero, though we did see a few baseball caps as well. Almost everyone had a bandanna around their neck, jeans instead of leather, knee-high leather boots, and either a brightly colored shirt or a plaid shirt instead of an embroidered, fancy mariachi-like top. And, in typical Mazatlán style, we saw one guy without a shirt. 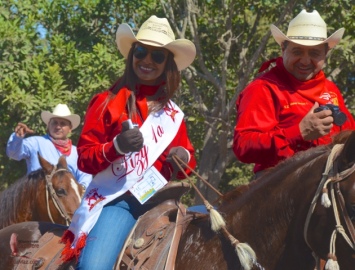 Princess of the parade 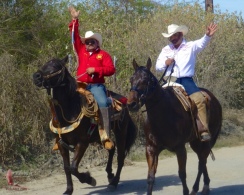 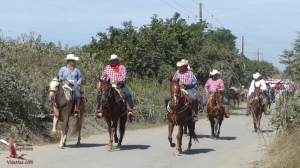 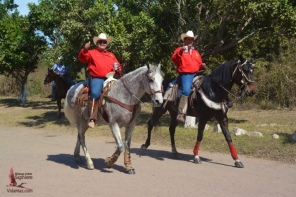 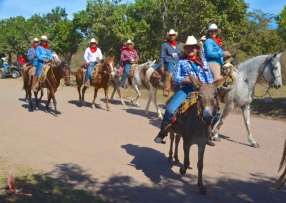 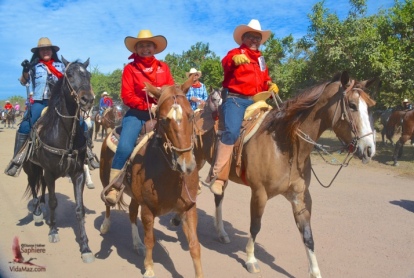 One surprising thing, at least to us: they were drinking a whole lot less here than what we witnessed in Jerez. Amazing? I’m confident they made up for it at the final ranch, or perhaps it’s because this is much more a family event, but we only saw beer, not the quantity of tequila and whiskey that we did in spring 2011 in Zacatecas. I will also say that Mazatlán wins, hands-down, in the friendliness department!

Men, women, children, couples, families, and singles participated. Riders told us there were over 1000 people participating, Tourism reported 600, but at most we saw 250-300 pass by us. We waited on the beach in Delfín for quite a while, significantly north of the bridge. However, the riders must have turned back to the road from the beach quite a ways north of Delfín, because we only saw a few on the beach—the bulk of them we saw on the road to Emerald Bay.

The cabalgata started at Rancho Chuchupira, which is about 14 km north of town. Because the bridge is under construction, the riders this year rested at Oceanica, the drug rehab center in Delfín just north of the wonderful new bridge. There the facility’s staff watered the horses, and guys on 4-wheelers handed out beer and water. The riders continued south along the railroad tracks, turning west for another rest at Rancho El Palomo, and then ate lunch and partied with beer, food and banda music at Rancho Las Habas. Quite a deal for 150 pesos! We met riders from Nayarit, Jalisco, Zacatecas, Durango and the USA, and were struck by how incredibly friendly everyone was. Greg and I both received multiple offers to hop on a horse and join the fun. 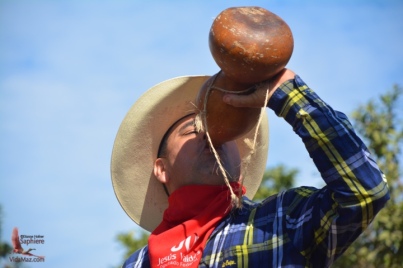 Photo from the cabalgata in Cerritos

If you’ve never witnessed a cabalgata, it’s worthwhile taking the opportunity. Sinaloa is farm country; raising horses is part of one people do on the ranchos here. Cabalgatas are another wonderful cultural opportunity we can avail ourselves of here in Mazatlán. I do, however, recommend you ride rather than just observe. Looks a whole lot more fun!