Quick! Do you know who Cuauhtémoc was? If you are an expat in Mexico, you should. Check your answer at the end of this post. The gorgeous tall ship that anchored in our bay this afternoon is named the Cuauhtémoc. She is scheduled to put into port in an official ceremony at the docks at 10:00 am on Sunday.

The Cuauhtémoc is a training vessel of the Mexican Navy with two main purposes: to train officer cadets in seamanship, navigation, leadership, and teamwork, and to spread the message of peace and goodwill from Mexico around the world. It sails with 55 officers, 74 cadets/midshipmen, and 120 enlisted crew members. The Cuauhtémoc was built in Bilbao, Spain in 1982, in a style similar to a 1930s German design. She has sailed around the world for the past 32 years, logging over one million kilometers. She is 90 meters long by 12 meters wide, with a sail area of 25, 500 square feet.

The ship and her crew have won many awards, including the prestigious Cutty Sark Trophy, which it received twice—during the Races for Great Tall Ships in both 1998 and 2000. In 2002, the ship won the Boston Tea Pot, a trophy awarded by the International Sailing Training Association ISTA for its nonstop sail of 1,342.7 nautical miles in 124 hours, at an average speed of 10.83 knots, setting the second-best record in the history of this competition. This record is better than all other ships in Europe and America that have received the trophy in the 12 years since then. It’s tough to get clear shots of a gorgeously lit ship floating and bouncing at night in the bay! My respects to those who do, and please teach me! Here you’ll see photos of the afternoon of its arrival (Saturday), sunset that evening, Saturday night, and Sunday’s sunrise. Click on any photo to see it larger or view a slideshow.

It arrived in Mazatlán this afternoon, Saturday November 8th, and anchored itself out in the middle of the bay. Oh is it gorgeous! It is supposed to put into port tomorrow, Sunday, though I’m unsure of the time. There will be tours while it’s docked here in town, so don’t miss out! Tours are Sunday and Monday from 11 am to 10 pm, and Tuesday and Wednesday 11 am to 5 pm. The Cuauhtémoc will remain docked here until its departure on Thursday, November 13th at 10 am. It last visited Mazatlán in 2005.

History of the Cuauhtémoc by the Secretaría de Marina

We had the BEST time this morning! We followed the ship as it made its way to the port. It was accompanied by loads of smaller boats. As it rounded the lighthouse hill heading into the port, there were still no midshipmen up on the masts. But as they headed for the breakwater, the masts were gradually filled, and by the time the ship approached us on the outer edge of the breakwater, the masts were filled with cadets! It was a sight to behold. We were accompanied by ten or so other people looking to get good photos. I hooted and hollered and welcome them to Mazatlán, and quite a few of the cadets waved back at me. Oh so cool! As they got into the dock, we heard them singing the Marina anthem. So awesome! Because we climbed out on the breakwater, and I didn’t have the right shoes, we missed most of the opening ceremony back at the dock, but it was so worth it! Just to have them wave and know we were some of the first to welcome them in! So cool!

Our mermaid and the Cuauhtémoc

Three islands and the Cuauhtémoc

Midshimen up on the masts 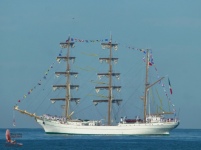 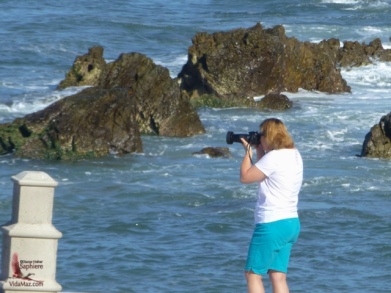 Me taking the mermaid pic 😉

Rounding El Faro hill–no one on the masts

The gang of photographers on the breakwater

Everyone’s up on the masts as it heads into port 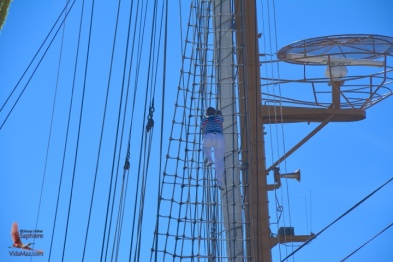 We hadn’t seen our friends in quite a while. Nice to reconnect!

Cuauhtémoc was the last Aztec emperor, who was executed by Hernán Cortés, Spanish conquistador, in 1525. Quite a few Mexican boys, streets and plazas are named in his honor.

One thought on “The Cuauhtemoc Tall Ship in Mazatlán”