The fiestas patrias this week in Mazatlán are always fun. Independence Day is the annual festival that involves the Grito. It is not to be confused with Revolution Day (Nov. 20), Constitution Day (Feb. 5), or Cinco de Mayo. This one is Independence Day, September 16, the day of “¡Viva México!”

In Mazatlán there is always a huge parade on the 16th, involving military elements and school kids. It is well worth attending. More on the parade below.

There is usually a classical music event in the Angela Peralta theater, this year held on Friday night the 14th.

And, there is our annual favorite, the events leading up to the “grito” on the night of the 15th. Always held in the Plaza República, this year’s events were exceptionally well scripted and performed, and most definitely of international caliber. We are truly blessed to live in this gorgeous port. Where else can you attend events like this, for free, feel very safe, and have front-row seats? We parked a few blocks away, took a nice stroll over, and enjoyed ourselves immensely. The lights in the Plaza were absolutely gorgeous.

Though we didn’t show up till about 9:15, events in the Plaza República began at 6:00 pm. When we arrived the incredibly talented young people of the Ballet Folklórico had already been dancing for an hour. We showed up in time to see one of our favorite local bands, La Falsa Orchesta Cubana (from that small island….Isla de la Piedra ;)).

There was a Master of Ceremonies and a clown, Trikis Trakes, who kept the crowd engaged while the stage was rearranged between musical acts.

We were treated to a selection of “Playback” numbers, the term they use here for lip-synching to retro songs. It was fun, as usual. Definitely a crowd favorite. The young dancers did a truly outstanding job.

Next up was Mariachi Continental, our local Mazatleco mariachi group. Very happily for us, renowned Mazatlán-born tenor Oscar Gomez was in town (he’d come to star in a Pedro Infante tribute earlier in the week). He accompanied Mariachi Continental on a few songs and it was just incredible. I swear the man carried a note for nearly a minute!

Again, the young dancers blew our socks off! And by now they’d been dancing nearly two hours! Hats off to them and to their teacher!

The only slight misstep of the evening occurred about 10 minutes till eleven, when the Banda de Guerra marched into the Plaza, on time no doubt, but their drums and bugles interrupted the climactic final song of Oscar Gomez, Mariachi Continental and the dance troupe.

The Banda de Guerra of course brought in the flag, taking it up inside to the city hall. The boxing match telecast live from Las Vegas was on the TV inside, and even for the arrival of the national flag, that TV wasn’t turned off.

Mayor Higuera brought the flag out on the balcony in order to deliver his official Grito for the year. 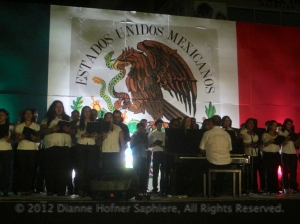 The Chorus of the Angela Peralta Theater sang the national anthem, also accompanied by the Banda de Guerra.

Confetti was released twice during the night, once after the Grito and again after the national anthem. It was so beautiful against the lights. 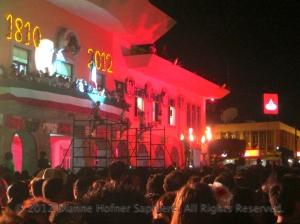 The official ceremony was followed by an aerial and fire dance performance, conducted just in front of the officials on the balcony of city hall.

Then a terrific fireworks display over the cathedral. The night was still, so the fireworks were gorgeous though there was little wind to clear the smoke quickly.

The final act of the evening was when the real crowds started to arrive: a free concert by perhaps the most popular local banda, Los Porteños. 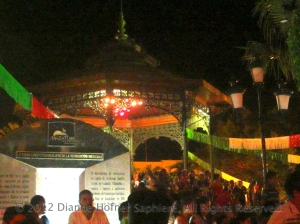 Heading out of the Plaza República was really beautiful. By now the place was packed, and in the darkness the lighting really glowed.

The events in the Plaza República were vendor-free, so we were thirsty afterwards. We strolled over to the Plazuela Machado for a drink before heading home. The plazuela was jam-packed with families, young people, and groups of adult friends. It was a gorgeous evening there as well.

Independence Day is an asueto, day off work, and usually involves a puente or long weekend. It commemorates Mexico’s fight for independence from Spain. It is not to be confused with:

El Grito (de Dolores), the Cry of Independence, is an iconic aspect of Mexican Independence Day. It was shouted by Padre Hidalgo from the small town of Dolores near Guanajuato in 1810, and is shouted in most towns and cities of México each year at 11:00 pm on the night of September 15. “¡Viva México!

The annual Independence Day Parade or Desfile Cívico-Militar in Mazatlán usually starts at 9:00 am on the 16th from the Fisherman’s Monument. It includes school kids dressed up, marching bands, and members of the military. This year it included 3000 participants: 1000 members of the Mexican Army’s 8th Infantry Batallion, 400 members of the 4th Naval Zone squadrons, students from eight junior highs, seven high schools and the Nautical School (1500 students total), and horseback riders from the Charro Association. It was a two hour parade culminating at the Aquarium after going down Ave. del Mar and around town.

In 2010 Mexico commemorated its Bicentennial of Independence. We celebrated it in Guadalajara, capital of the state of Jalisco. You can see our blog post about that here.