This year is the 135th anniversary of the Carnaval here in Mazatlán. With our history as a port city (read pirates, drug runners and all sorts of shady operators), since the early 1800s my beloved home has been the site for a pre-Lenten Mardi Gras. They say we are the third largest in the world, after Rio and New Orleans. But who’s to say? 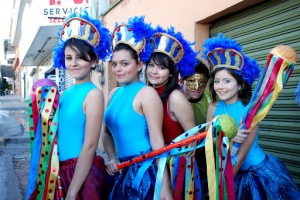 The main events run from the 19-24 of February this year, but for over a month now the fervor has been building. We’ve had parades, campaigns and parties for all the candidates for Queen and King. We’ve had the unveiling of the decorations, and the light display is fantastic. Strings of multi-colored lights are hung along the malecón from the Pedro Enfante statue to the Golden Zone (5 miles maybe?). It is a sight to behold! They include 90 different designs of very large, lighted masks on either end of each block. The lights are strung all through the winding streets of the Centro Histórico, too, and there are ticket booths, temporary restrooms, chain link fencing, and loads of background scenery everywhere. 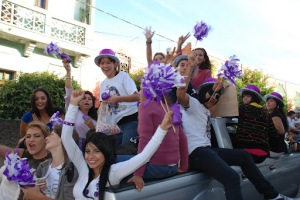 A few nights ago we had the final vote counting to choose the Queens (Queen of the Carnaval, Queen of the Juegos Florales, and La Reina Infantil) and King of the Alegría (my favorite local Banda El Recodo–see photo below of me honoring them with my presence 🙂  ). They gave Greg a CD of their current hit, “Te Presumo.

Rigoberto Lewis has made the carrozas, those incredibly gorgeous, ornate, over-the-top Carnaval floats, since 1960. He seems to live the whole year for Carnaval, eating, sleeping, dreaming and breathing the floats.

So what actually happens during Carnaval? Well, this will be our first, so I look forward to letting you know. Some of what I know will happen is this:
This year’s theme is Fantasía Universal, so we are expecting to travel the world from our own local celebration. We can’t wait, and we hope to see you here for Carnaval soon! Don’t plan on sleeping though.