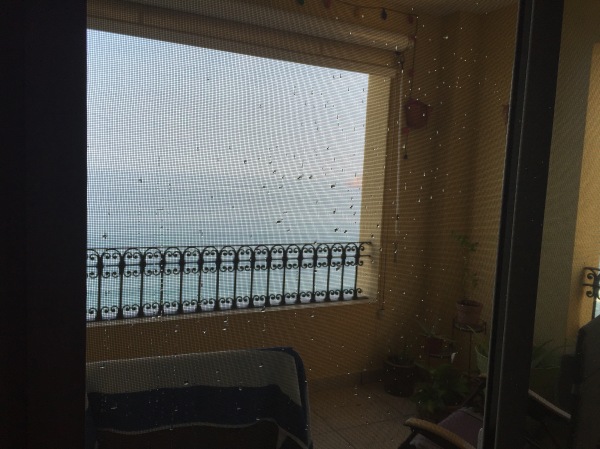 I remember the first time it happened. I walked up to the screen door, and saw the water droplets. I thought maybe Greg had watered the plants outside and splashed the door. Nope. Maybe someone in another apartment had done so, and the water flew on the ocean breeze and caught us? Lord knows it hadn’t rained.

I cleaned the screens, and several hours later there was more water. I looked up to the ceiling. Maybe the water was coming from a leak upstairs? No; the ceiling was clean and dry. Could it be that the ocean breeze coming through the door is to blame?!

Indeed. In Mazatlán we have all sorts of seasons that I never knew when I lived up north or in Japan. And one of them is the “season of the crying screen.” It’s now, that time of year when the heat has begun but the rains haven’t.

Living directly on the ocean, we are blessed with many things, including the fact that in our house we haven’t yet really felt the heat that everyone has started complaining about. If we keep the windows open, the ocean breeze keeps our place pleasantly—at least for another few weeks or more. Of course, it also corrodes every metal object in its path, but that’s another story.

With the windows open, however, and the change of temperature from hot in the daytime to cool at night, the salt air condenses on our screens and forms sticky drops of salt water. They are kind of pretty. They don’t run; they are thick and gel-like. I suppose they are formed by the same type of phenomenon that generates the rain that will soon visit our port.

3 thoughts on “The Crying Screens”